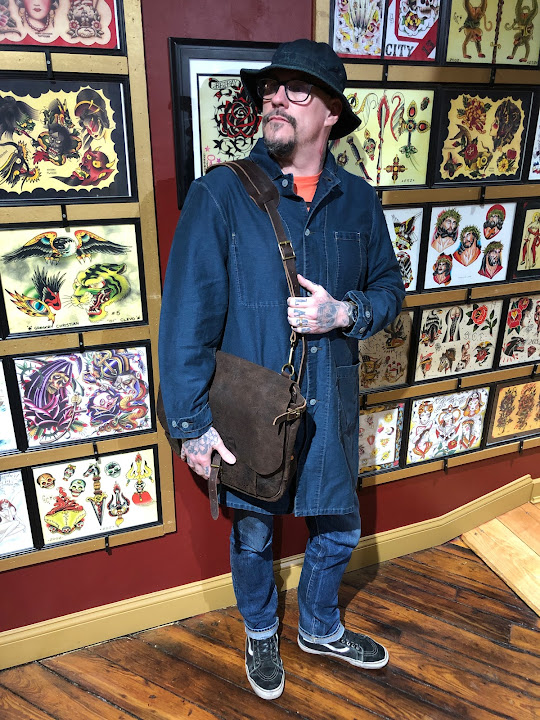 Sean Martin is a multi-versed musician, producer, and tattooer hailing from Connecticut. As a guitarist, song-writer, and/or producer he has worked with a variety of well-known artists including Hatebreed, Cold Cave, Wear Your Wounds, Umbra Vitae, Twitching Tongues, Cage, Kid Cudi, House of Blow, Head Automatica, XO Skeletons, Jet Fueled Horses, Handsome Boy Modeling School, and more. His versatility and flexibility within music allows him to blur the lines in-between the confines of Hardcore, Electronic, Metal, and Hip-Hop. Martin is, also, a skilled tattooer at Brass City Tattoo located in Oakville, Connecticut promoting the traditional approach to the craft. Founded by Martin himself between 2020-22, No More Magic combines ominous melodies with downtempo beats to create a dizzying dream-like atmosphere. Paying homage to the golden era of Hip-Hop while forging ahead down its own dark road. For fans of Portishead, Massive Attack, and DJ Shadow. No More Magic's Introducing The Magician EP is now available digitally on Residual Effects.

Sean Martin told The Witzard: "I started making the EP in the beginning stages of what would become a Global Pandemic and a Quarantine/Lockdown. I was inspired by a movie (which will remain nameless) that I saw and ended up using as the bulk of my sample material for the project. The name No More Magic was something I came up with years ago upon realizing that the amount of information that was available to everybody was taking away from a lot of what I considered to be "magic." In other words, a lot of magic secrets were being revealed to anybody that had even a passing interest in something or just wanted to know the answers to something and whether they were the right answers or the wrong answers seemed irrelevant."

"When I saw and heard what would eventually become the source material for this EP, I just kind of mutated it into an imaginary place where there's only one real magician left in the world and these instrumentals—along with the [sound bites] I'd chosen—would paint a picture for anyone willing to put that all together or, at the very least, give the listener a 10-minute audio journey to escape through. This is the first EP in a series where our hero, The Magician, will go on a few cryptic auditory adventures. Upon making the first beat, I realized that I was calling upon a lot of my influences from the 1980's and 1990's, via the drum breaks I was sifting through and/or choosing, so I decided to go with a RZA meets Prince Paul meets James Lavelle kind of thing. I assembled each of the three main beats in a similar fashion for continuity whilst giving them each their own identity and vibe. All using samples from the same source, Ableton Live [and] an old laptop and an old Triton keyboard," Martin continued. Check out his track-by-track breakdown for No More Magic's Introducing The Magician below.


"'Introducing The Magician" does just that as the title says. It's your first glimpse of the main character, a magician that is trapped within the realms of a world that no longer needs magic, illusion, or fantasy because all secrets have been revealed and curiosities are quelled by a small answering device that just about every individual has within arm's reach."


"'Spell 1" is simply an old drum break slowed down with some creepy synth stuff on top, via Ableton Live. I wanted to create two "intermission" pieces, if you will, just to break it up and help add to the idea of The Magician; this is the first one."


"'The Magician Gets Hassled" is where things get a little sticky for our main character. He's been picked up by the local authorities, searched, questioned, and is now in the back of a squad car during a horrible rain storm and may or may not be starting to feel the effects of a previously ingested hallucinogen. Hilarity ensues."


"'Spell 2" is the same idea as "Spell 1;" a short intermission beat made by slowing down an old beat break and adding some creepy synth over the top, via Ableton Live."


"'The Magician's Warning" is just that, although, cryptic at best. Again, using drums that may be familiar to some and samples from the source material, as well as a little bit of good old-fashioned playing of the instruments in order to tame things and give the track a bit more of a "song" construct."