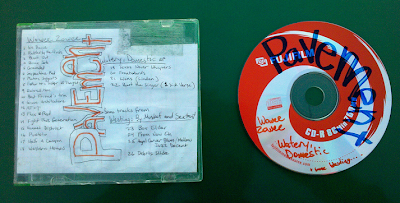 At some [now unknown] point in my high school career (Class of 2006), My Indie Rock-loving friend and frequent Gym substitute Jay passed me off an interesting CD-R - Pavement's Wowee Zowee. The 18-track collection's title is reportedly a homage to The Mothers of Invention (Frank Zappa)'s 1966 debut, Freak Out! My one-of-a-kind copy was also paired with the Watery, Domestic EP, as well as select tracks from the Westing (by musket & sextant) EP comp.
Pavement was within the pack of the first wave of Indie/"Alternative" bands co-existing during the mid-'90's. Pavement, along with Weezer, TV on the Radio, Pixies, Secret Machines, Radiohead, and a few others, were the bands that really introduced me to the Indie [Rock] genre... which anymore, is really all I listen to. Pre-Indie exploration, I was heavy into Old School Punk bands and before that, it was Wu-Tang, Alanis Morissette, and Sublime (@ about the age of 12-14).


The whole album really is a "mixed bag" of greatness - While the first half of the record (roughly Tracks #1-8) is especially strong. But "Rattled By the Rush" is hands down, my favourite track of the bunch! It's so catchy and Poppy/"commercial," yet totally stream of conscious; Almost comparable lyrically to Lil' Wayne's output. On the strength of the CD-R, I went out and bought Pavement's previous 2 releases - Crooked Rain, Crooked Rain and Slanted & Enchanted.

Posted by Matt Horowitz at 7:28 PM