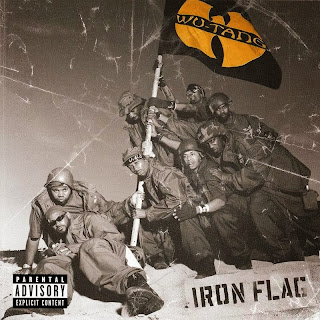 While it's a pretty painfully disoriented sequence of events, Wu-Tang Clan's recently unearthed "Y'all Been Warned" music video is more or less the sheer epitome of everything good, bad, or indifferent about late 90's-early 2000's Hip-Hop all rolled into one; a simpler time when you could just book a hotel room, rent a few strippers, invite some buddies over, and coincidentally film the whole thing with a department store handy-cam. Acting as the proper 12" B-side to "Uzi (Pinky Ring)," "Y'all Been Warned" simultaneously features sharp-tongued swordsmen Method Man, RZA, Inspectah Deck, Raekwon, and Masta Killa, Sugar Factory Films seemingly produced a set of companion lo-fi visuals back around 2001. It's pretty uncanny, yet surprisingly awesome that an unreleased video-single from a group of this caliber has just sat locked up in "the vaults" somewhere in unreleased form for nearly 15 years! "That's what's up, yo, the kid with the buck-toothed flow. Oh, that's Meth Man, south paw, I throw my left hand to that hardcore shit that even make the Tec jam," raps charismatic emcee and How High co-star Method Man. Master-producer RZA and his Wu-Tang disciples are currently working on their second collaborative album without Ol' Dirty Bastard, A Better Tomorrow, their first full-length since 8 Diagrams (2007). Wu-Tang Clan have supposedly been chipping away at the long-rumored album since summer 2011; following a slew of scattered recording sessions over the past few years, habitually absent members, and numerous delayed tentative release dates, "The new Wu album 'A Better Tomorrow' [is] coming soon," according to their Facebook page. Sugar Factory Films cleverly seem to be using "Y'all Been Warned"'s web-unearthing as cross-promotion for their Tarantino Productions-sponsored crime comedy, Underbelly Blues; "an experimental, fast paced celebration of street slang, ghetto wit, and gratuitous violence. Winner of four Best Picture awards and the buzz of the 2012 Hollywood Film Fest."