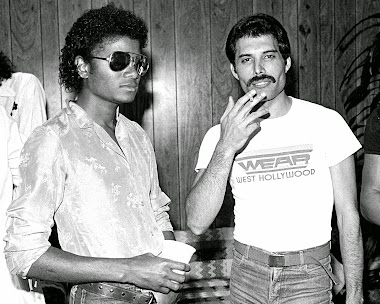 It's almost unfathomable to me, as both a home-grown music writer and music-buying all-American 20-something, to hear that musical luminaries Michael Jackson and Queen frontman Freddie Mercury once recorded a number of incomplete tracks together that have been sitting in a vault somewhere in "Neverland," collecting dust for nearly 30 years! Mercury supposedly brought the potentially über-fruitful 1983-84 sessions to a screeching halt after Jackson attempted to bring a llama into the recording studio. Head Stereogum writer, Tom Breihan basically conceptualized the whole mind-boggling scenario perfectly: "[it's] like finding a giant pile of money under the bed in your hotel room and deciding, what the Hell, you'll just leave it there" ha. But now, Grammy-winning producer and Madonna collaborator, William Orbit has gone back in and meticulously re-produced/mastered the long-lost Queen-backed track, "There Must Be More to Life Than This," which after three decades-worth of endless set-backs, will finally see an official release on the band's upcoming Queen Forever compilation. While it seemingly wasn't ready for inclusion on Michael Jackson's recent cut-and-pasted posthumous release, Xscape, a Jackson-less version of "There Must Be More to Life Than This" originally appeared on Freddie Mercury's premier solo album, Mr. Bad Guy. It was first penned by Mercury during the writing sessions for Queen's 1981 album, Hot Space wherein the piano-accompanied track ultimately went unfinished and shelved, but was resurrected just three years later during the recording of The Works; Michael Jackson then recorded his vocal parts in Los Angeles around 1984, although for whatever reasons, Mercury decided to include it within Mr. Bad Guy (1985). "There Must Be more to Life Than This" will see it's first official Queen/Jackson-sanctioned release on Queen Forever, which is currently slated for a November 10-11th release, along with two additional unreleased 1980's era Queen treasures, "Let Me In Your Heart Again" and "Love Kills."

Posted by Matt Horowitz at 7:20 PM