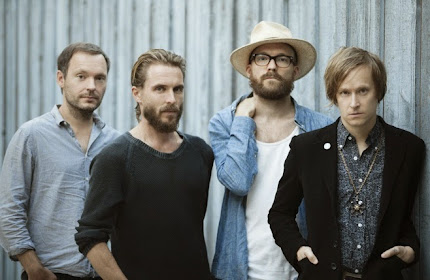 "It's not a reunion anymore. This is one of the most radical things we've ever done, both musically and lyrically," Refused frontman Dennis Lyxzén quipped upon the sporadic release of the Swedish Hardcore Punk band's first single in some 17 years, "Elektra." "Nobody wanted us to f*ck with the image of the band who makes a great album and splits up," drummer David Sandström added. "Nobody wanted us to dilute it. That actually provoked us." While it should have arguably been one of the formative Punk Rock records I 'cut my teeth' on as an angsty teenager along with Black Flag, The Misfits, and Minor Threat/Fugazi, for whatever reasons, I hate to admit, I only first heard Refused's genre-shaping magnum opus, The Shape of Punk to Come just a few years ago; upon a first listen, "Elektra" follows in line with what Rolling Stone sums up as a seamless "fusion of Hardcore, Techno, Jazz, and Hip-Hop," and to my well-trained ear, even evokes sonic undertones of apparent influences Black Sabbath and Nine Inch Nails.


Refused notoriously broke up just months after releasing their 1998 masterpiece, The Shape of Punk to Come upon the unsuspecting world, made up and re-formed for an all too brief 2012 reunion tour... after which it was all seemingly over, and then, quietly fired long-time second guitarist Jon Brännström a couple years ago. Aside from yesterday's (then) head-scratching "THERE'S NO ESCAPE" viral message yesterday, Refused's triumphant comeback album Freedom comes with little to no prior warm-up press. "Freedom goes a step further by incorporating the wide-ranging influences that have shaped each band members' personal tastes;" secretly recorded along with Arcade Fire producer Nick Launay and Pop-minded Swedish super-producer and long-time Refused fan, Shellback who helped the band co-write album opener "Elektra" and "366." Just a matter of hours after Refused's initial album release announcement, Freedom is already available for pre-order from band-sanctioned Kings Road Merch web-store in a number of multi-formatted CD/LP bundles ranging in price from $15.99-56.99.
Posted by Matt Horowitz at 8:50 PM