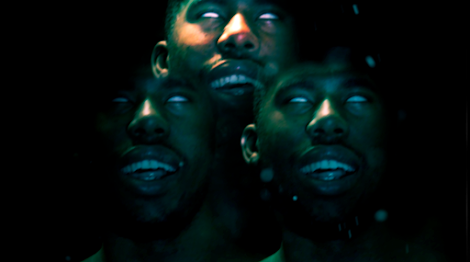 "The WOKE project started about three years ago. I, myself, and some screenwriter friends of mine started writing a script for feature film called WOKE. It was something that we developed for quite a while. Initially, it was going to star Ishmael [Butler] from Shabazz Palaces and Jeremiah Jae. We worked on it for a while, started work-shopping, but there's always the financial issue — I haven't found anyone who is going to invest in the film," Flying Lotus recently revealed during a Pitchfork-prompted phone interview upon the release of his [adult swim] single, "The Lavishments of Light Looking." Despite the fact that he has yet to acquire adequate funding to produce a WOKE film, Flying Lotus aka multi-instrumentalist Steven Ellison decided to instead focus on the musical accompaniment for said unmade film first; "We started working earlier this year on music. We did a few songs. We have a few things. We're just going to let it build naturally, see what happens. We're not going to rush to finish it," @flyinglotus haphazardly continued. Ellison further adds that WOKE currently have about nine songs in various stages of development, including a few more recorded with Parliament-Funkadelic founding member George Clinton, all of which have been recorded organically, together in the same room over the course of the past year.


Although WOKE's core members have all previously worked together in a number of session musician-esque facets, Steven Ellison, Stephen Bruner (Thundercat), Ishmael Butler, Tendai Maraire, and George Clinton have never collectively worked together on a piece of new, original material quite to the effect of "The Lavishments of Light Looking." Flying Lotus has worked with each of his fellow WOKE members over the course of his brief nine-year career; having worked closely with right-hand bassman Thundercat on countless projects, most recently, his latest full-length album, You're Dead!, Kendrick Lamar's To Pimp a Butterfly opener "Wesley's Theory" alongside Clinton, and non-album loosie "hide me" with Shabazz Palaces, which appeared on his Ideas+drafts+loops left-overs collection. To paraphrase 1990's R&B vixens En Vogue, "Free your mind... and the rest will follow," a common phrase often uttered by Parliament-Funkadelic frontman and reigning Godfather of G-Funk George Clinton over the past 40 or so odd years. "The whole point of doing it this way was we were like, let's just see what happens if we put this one out there, see if people f*ck with it, see if people want this to continue... I really hope that it just kind of unfolds naturally, as most things tend to in my creative life," Flying Lotus stated when asked what his future plans for super-group WOKE might, in fact, be.

Posted by Matt Horowitz at 8:36 PM