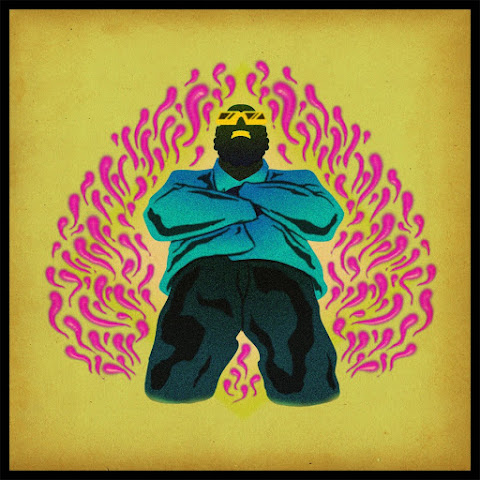 "[I] wrote this in the Fall of 2014 and recorded vocals for a demo to shop around in the bedroom June '15; tried to find another home for it, since the beat wasn't mine, but never did. Been sitting on it all this time and figure it may never see the light of day, so why not just put it out. I've never put up somebody else's beats without permission, which has always held me back. Got tons of songs written over other people's beats I don't know. Orphan rhymes. So, if [you're] mad at me FlyLo, you can find me easy," charismatic Future Islands frontman and long-time emcee Sam "Hemlock Ernst" Herring recently wrote on Soundcloud. "Bluebells Set Wet In The Moss" was released Tuesday morning without any prior murmur of release rumblings and appears to have been completed sometime between Fall 2014 and June 2015 and was in fact, skillfully freestyled over the Flying Lotus-produced beat for Captain Murphy's Earl Sweatshirt-assisted 2012 [adult swim] single, "Between Friends." Fingers crossed, maybe we can even expect a Funky fresh Hemlock Ernst & Flying Lotus collaboration in the not-so-distant future because of this leak!


Sam Herring appears to have first recorded his vocals over Captain Murphy's villainous instrumental to "shop around" to various producers and beat-makers, attempts which may have fallen through or might have never gotten off the ground. It seems as though Herring has been collecting beats and rhymes, whilst collaborating with everyone from Busdriver to Baltimore greenhorns Bond. St. District, for his long-rumored debut full-length as Hemlock Ernst. Prior to "Bluebells Set Wet In The Moss," he's quietly leaked out "Barzan Freestyle," "My Myopia Freestyle," "In The Land of Cats," and "Mazatlan Flex Freestyle" with Fat Tony, who came through "all the way from Mexico." I was lucky enough to recently speak with Hemlock Ernst beatsmiths All These Fingers, Butch Dawson, and Chris ('i's') McCormick about their assorted collaborations with the storied Trouble Knows Me emcee himself. "I know exactly why he is doing what he is doing right now, but [I don't know] if I'm allowed to say anything haha, but basically, he has a Hip-Hop project dropping at some point," ('i's') revealed, as recently as October 2016.
Posted by Matt Horowitz at 12:33 PM