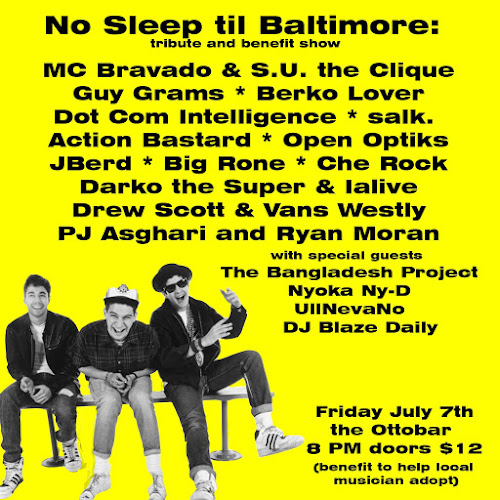 No Sleep 'til Baltimore was a tribute/benefit show held at The Ottobar in Baltimore back on Friday, July 7th. It was billed as a "benefit to help local musician adopt" with "local musician" being producer John Bachman (Jumbled) and his wife Rachel. Not only was No Sleep 'til Baltimore a fundraiser to help The Bachmans earn money for their adoption, it was dually billed as a tribute to the Beastie Boys' monumental Rick Rubin-produced 1986 Def Jam debut, Licensed to Ill. Berko Lover did a rendition of "Girls," GUY GRAMS performed a roaring rendition of "(You Gotta) Fight for Your Right (to Party!)" MC Bravado & S.U. The Clique covered "No Sleep 'til Brooklyn," Drew Scott & Vans_Westly did "Hold It Now, Hit It" with a little help from Jumbled himself, The Hell Hole Store covered "Brass Monkey," and much, much more. By all accounts, No Sleep 'til Baltimore was a great success and now, nearly two months later, John & Rachel Bachman have welcomed a beautiful adopted baby girl into their lives. While it remains unknown if all of the participating artists recorded studio versions of their various Licensed to Ill tracks, The Hell Hole Store without a doubt recorded a 2017 version of their "Brass Monkey" cover, now re-titled "Brass Flunky." It appears within Already Dead Tapes & Records' recent 28-track Already Dead VII comp. alongside the likes of MGNTK. emcee UllNevaNo, Totally Boring, Hypocrite In a Hippy Crypt, About a Million, and The Grow Fangs. Already Dead VII additionally showcases a choice cut from Darko The Super entitled "I'm Only In it for The Money" produced by The Difference Machine emcee and "spiritual advisor" Day Tripper. Darko graciously provided detailed statements on "Brass Flunky" and The Mothers of Invention-referencing "I'm Only In It for The Money," which can both be read down below the break.


"Jumbled [John Bachman] from Baltimore invited me and ialive to perform at a Licensed to Ill tribute/benefit show to help him and his wife adopt, which we were super excited about. Then, we realized how hard it was to perform the song we chose, "Brass Monkey." Eventually, ialive found the sample they used and whipped up a Hell Hole version and we wrote and recorded our verses. Then, the next day, tried to perform them in Baltimore at The Ottobar. It didn't go to well, but it sure was a fun evening and now, just a few months later, Jumbled and his lovely wife are the proud parents of a beautiful baby girl. You can find this track on Already Dead Tapes' latest compilation."


"[Day Tripper] sent me this beat back in 2014, that's when I recorded the first verse. Much more recently this year, I found the song going through my hard drive and wrote the second verse and mixed and mastered everything again. I sent it to Josh [Tabbia] at Already Dead and it landed on their latest compilation. "I'm Only In for The Money" was an album idea I ditched; an obvious reference to The Mothers of Invention. I wanted to wear a dress on the cover [of We're Only In It for The Money] just like them, too, which inspired my video for "The Learning Channel.'"

Posted by Matt Horowitz at 8:33 PM