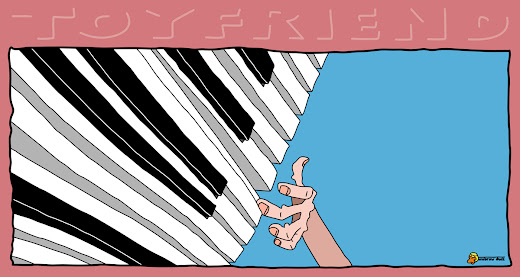 TOYFRiEND is the latest Avant-Garde Indie-Pop project from Hip-Hoppers Jason "ECID" Mckenzie and Louis Dorley AKA louis logic. ECID & Louis Dorley readily liken their inaugural release, fullHearty EP to Indie/Dream-Pop staples Blonde Redhead, Blood Orange, Elliot Smith, Little Dragon, Unknown Mortal Orchestra, Beach House, Purity Ring, and Animal Collective/Panda Bear. fullHearty features Louis Dorley on vocals and keys and ECID helming both drums and production duties. Amidst six original Indie-Pop-minded TOYFRiEND compositions, fullHearty additionally features two heavily re-worked cover tunes: Howard Jones' "No One Is to Blame" and "You're The Best (Around)" as performed by Joe Esposito, most recognizably from The Karate Kid (1984.) Prior to TOYFRiEND, ECID self-released his latest critically-acclaimed album, HowToFakeYourOwnDeath and contributed production work to Mega Ran's Ceschi & Sammus-assisted "OLD ENOUGH" from this year's Extra Credit; while Louis Dorley, on the other hand, last released an album entitled Look On The Bright Side (as louislogic) on Fake Four Inc. back in 2013, which was followed by "a collection of rare, exclusive out-take and guest appearance songs ranging from 2004-2013" entitled Old Man Liver in 2014. TOYFRiEND's debut EP fullHearty is now available to stream or download on ECID & Louis Dorley's newly-launched Bandcamp on a "Pay-What-You-Want" basis. From what I hear, Jason ECID & Louis Dorely are currently holed up in their Brooklyn-based Band House already hard at work on TOYFRiEND EP2.


"In the winter of 2014, I had the pleasure of joining my dear friend Louis Dorley on the "Rhyming Gosling Tour." As with most Indie Rap tours, it was filled with its fair share of ridiculous inside jokes, near-mental breakdowns, and "holy sh*t, that was the best night ever!" moments. We bonded over our shared taste in music (especially, outside of Hip-Hop) as well as a desire to explore a new creative frontier outside of our perceived bubbles—at that time, I would have never thought we'd start an Avant-Garde Indie-Pop band and I'd move to NYC... A few months after that tour, when I was back in [Minneapolis] and Lou was in [Brooklyn], we started sending tracks back-and-forth. He'd send me a simple keyboard arrangement (using toy instruments) with some vocals on it, maybe a verse and a hook's-worth. Then, I'd take the .WAV file and treat it like a "sample," start manipulating it, and sequencing drums (mostly derived from found sounds.) After a few emails, it would start to turn into a song. It was such a liberating feeling working on these early tracks. It really felt like we captured something new. Fast-forward to 2017 and we present to you foolHearty, a collection of 6 original songs and 2 covers. Click here to download the debut EP from TOYFRiEND for FREE on Bandcamp. You can also stream foolHearty, via these fine digital platforms: Spotify, Apple Music, Google Play, Amazon & TIDAL. Follow TOYFRiEND on Facebook."

Posted by Matt Horowitz at 7:54 AM