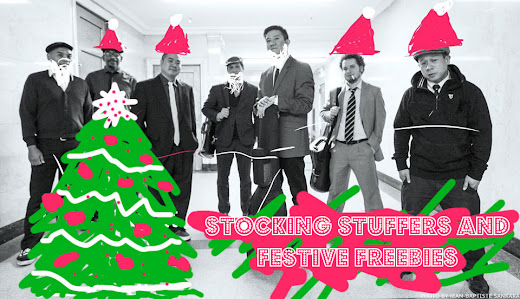 Let's just get right into it: it's that special time of year where everyone readily flaunts their holiday cheer for everyone to hear! Jingle Bell Rocks! director and Christmas record collector Mitchell Kezin (@mabooshi) curated an especially festive mix full of Alt. Christmas songs, Hanukkah hymns, and obscure holiday jams entitled Mitchell's 'SOUL SISTA' Holiday Mix for The Witzard. Thanks again to Mitchell for sharing his special brand of holiday cheer and a very special thanks goes out to The Ologiest AKA JD at Common Good Records—his old imprint, When Crates Create combined with Analog Burners. In addition to my personal 2017 holiday favorite, Jumbled's Christmas comp. Merry Christmess, there has been quite the influx of festive musical cheer spread by your favorite musicians, emcees, and producers just in time for your last-minute shopping and wrapping sessions. Now, without further ado, I'm proud to present to you: The Witzard's 2017 holiday break-down fittingly entitled, Stocking Stuffers & Festive Freebies! Merry Christmas to all, Happy New Year, Happy Kwanzaa, and "a Festivus for the rest of us!" Shout-out to Steve "Sulu" Mallorca of Sulu & Excelsior for sprucing up a particularly festive December 2016 P.I.C. show flyer for this very occasion!

"These are songs that I performed at Tracy & Heben's Kwanzaa Specatacular (Another Round Podcast). They are TRAP KWANZAA CAROLS because why doesn't Kwanzaa have any cool songs? Black people are too musical to not have ANY Kwanzaa music out there in the field, so I'm just doing my part to rectify that. Merry Kwanzaa," donwill declared. Tanya Morgan emcee and producer donwill's TRAP KWANZAA CAROLS EP is now available for streaming and FREE download from his Bandcamp.


"Everybody that knows me knows that I'm a sucker for Christmas music. Hell, I've made two Christmas beat tapes. Last year, after I dropped my Santa Plays It Wrong [Part I-II] record, I got an email from Drtysoap about using a track as the lead-off to a Christmas mix. As soon as I heard it, I knew we had to put it on tape, so we built this summer and he doubled the length. And it's crazy! A 60-mixtape including 30 Christmas tracks not suitable for your grannie's cookie decorating party. The mix covers a wide span of off-the-radar holiday-based Hip-Hop instrumentals and songs; tracks from producers including The Ologist (that's me!) I.N.T. Mndsgn, Lakim, Tall Black Guy, Suff Daddy, and more. Tell Charlie Brown "sorry" and put away that Vince Guaraldi [A Charlie Brown Christmas] soundtrack this year. MERRY CHRITHMITH," The Ologist proclaimed, via email.


"EPIC BEARD MEN (the SAGE FRANCIS + B. DOLAN super-duo) are spreading their special brand of cheer this season by declaring "WAR ON CHRISTMAS." May this free single help you de-stress and be blessed during these holidays of high-anxiety. Check out the new [EPIC BEARD MEN] merch items at EpicBeardMen.com and stay tuned to their social media channels to stay up-to-date on all the new music and tour dates we've got planned for 2018... 20 demos have already been recorded for the EBM project and shows are already being booked. Expect a lot of brand new material and tireless touring in 2018 to support the album. Until then, just remember that it’s the beard on the inside that matters," EPIC BEARD MEN exclaimed.


"Gifts Under the Tree is a live recording of a beat set I did this past Saturday, 12/18 at a producer event that I started with two friends in Norfolk [Virginia] called @_thanksforlistening (Thanks for Listening.) The whole concept of the event is to focus on the producer community and a place where we can build the culture. So, we do a couple of showcases and then, an open beat cypher, where anybody can come and play beats—off a phone, laptop, beat machine, whatever. December was the third event and I did a showcase of all Christmas beats. Five are from past projects and five are new ones I made this month. It will be available as a free download on our Bandcamp through New Year's Day," The Ologist further detailed, concerning his latest Christmas release.


"Right before Thanksgiving, I was telling my better half, Mrs. Sulu, about a musical and lyrical idea I had for a Sulu & Excelsior Christmas song. I wanted to play with the words "under" and "over" and I had the opening lines and a hint of a melody, but that was it. So, I was doubtful I'd actually follow through with completing this song. However, Mrs. Sulu, really dug what she heard and unbeknownst to me, started writing away. One day in the middle of work, she texted me an entire draft of a song, starting with my opening and then going off into a whole beautiful place. After that, I forced myself to sit and hammer out some chords and the rest of the melody and ended up building the beat and the music shortly thereafter.

With some tweaks to the lyrics to fit the music and of some quick Sulu rhymes, "THE OVER UNDER" was nearly complete. The final touches came when I recorded the horns and Excelsior crew members, DJ Mas threw on some fine cuts and Joel "Bernard O'Reilly" a nice bass coda for the Carnaval-style ending. Music has always been the gift that has kept on giving to me, so I'm really happy to be able to pass it on just in time for the holidays... so, have the happiest of holidays and hope this song can be a part of your merriment and hopefully, induce some booty-shaking, in the process. Merry Christmas and Happy New Year," Steve "Sulu" Mallorca cheerfully shouted.

Posted by Matt Horowitz at 8:56 AM