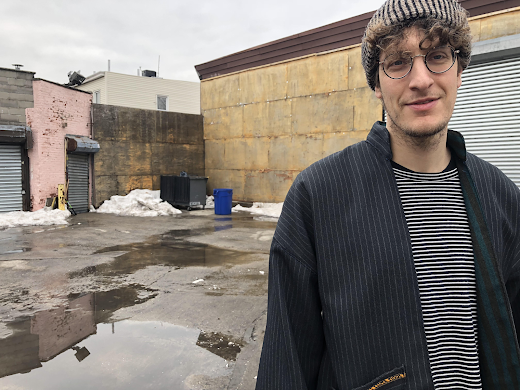 Singer and multi-instrumentalist Adam Lempel recently moved back to New York, after living abroad in Amsterdam, while attending Hogeschool voor de Kunsten Utrecht (HKU) for his Masters in Music Design. Lempel has now, returned to his "old stomping grounds" on The East Coast wherein he previously spent a solid decade in Baltimore's DIY Indie Rock scene as part of WEEKENDS, Winks, and his own band, Adam Lempel & The Heartbeats. Since 2012, Adam Lempel has released an EP and an album with The Heartbeats, yet another album as "Adam Lempel & The Casiobeats," and a 2016 solo album entitled "STILL LIFE." I talk to Adam from time to time—we actually, met once at a (likely) 2011 Surfer Blood/WEEKENDS show at First Unitarian Church—and I know, he's been working on a proper follow-up to "STILL LIFE" for a couple years now. Said album, now titled Jinx, will likely be released at some point during 2018. Adam Lempel recorded Jinx with HKU classmate and producer Friso Hoesktra; most of the album's songs were "constructed in a computer," a stark contrast to Lempel's previous more lo-fi material.


"So, "Run (Disconnected)" is the second release off of my upcoming release, Jinx. I worked closely with producer Friso Hoekstra, a classmate of mine at The Hogeschool voor de Kunsten Utrecht (HKU) and it was kind of an International effort. The drummer, Tcheser Holmes, played on the track in New York—recorded at Gravesend Studios at The Silent Barn with Ava Luna's Carlos Hernandez engineering. I met him at a holiday party at The Bowery Poetry Club one night; I heard him drumming, I could swear it was a recording 'cause it sounded so tight. I really fell in love with the sound of his playing and his groove. My friend, the visual artist Lindsay Carone, provides harmony and sings along. She has an excellent natural ear for harmony and can just come up with these amazing 3-part harmonies on-the-spot. It's really a gift and a talent that I don't possess. The song was mixed [and mastered] by Wessel Oltheten, who was my mixing teacher at HKU. He's truly a master at balancing a lot of different elements and making it sound clean and powerful. He literally, wrote a textbook on mixing that will be out in English shortly (right now, it's only in Dutch.) Also, my long-time friend, Jared Hiller, who plays in the band Operator Music Band, made a special guitar pedal that I use throughout the recording. It gives the guitar it's crazy and unique sound. He has a guitar pedal effects company called L0/Rez based in Greenpoint and we were actually, in our first band together, called Elementary Playground, circa 2002-2004, when we were in high school."