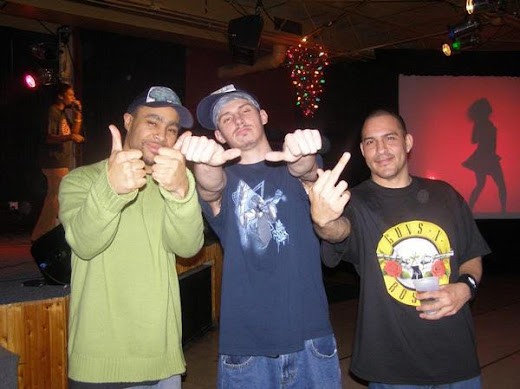 Short Fuze is an Uncommon Records affiliate, who I've personally been listening to and conversing with online since, at least, 2016. It was then when Short Fuze released Autonomy Music with Uncommon Nasa AKA NASA. Short Fuze & Nasa previously collaborated together on a 2010 album, Lobotomy Music, and 2011 follow-up/remix EP, Toxicology Music. In fact, earlier this year, Uncommon Nasa & Short Fuze debuted their official/re-branded collaboration as Guillotine Crowns on "Champions" on Last Sons' Nasa-produced album, CHEKHOV'S GUN. It appears as though, this whole time, since about 2009, Short Fuze has been on an indefinite hiatus from his main group, W.A.S.T.E.L.A.N.D.S., which was initially formed in 2000; in its earliest incarnation, W.A.S.T.E.L.A.N.D.S. consisted of Short Fuze & Augury, while third emcee, Taiyamo Denku joined later in 2001. During their initial 10-year run, W.A.S.T.E.L.A.N.D.S. released four albums, Seasons Change, Rules of Evolution, Rise of An Empire, and After Years of Television, as well as a 2004 compilation entitled W.A.S.T.E.L.A.N.D.S. ‎Presents: Guests of Honor.


Now, after about 10 years of each doing their own thing, Augury, Short Fuze & Taiyamo Denku have reunited as W.A.S.T.E.L.A.N.D.S. for 13 brand spankin' new, neck-snappin' tracks on BBQ & CHAOS. It boasts production work throughout from Dcypha, Agartha Audio, Black Tokyo, Audio Pilot, Ill Majestic, Grendal, Uncommon Nasa, and Dynamo with cuts across BBQ & CHAOS provided by Dcypha. During a recent email conversation, Short Fuze explained: "Taiyamo Denku & I got together one day for a recording session he helped me with. He mentioned that he had some tracks him and I recorded a few years prior. I took those tracks home and listened to them; there were four or five of them that were really good." Initially, the plan was to simply upload said tracks as loosies to Short Fuze's website for die-hard W.A.S.T.E.L.A.N.D.S. fans to enjoy... but, it soon became apparent Short Fuze, Augury & Taiyamo Demku were onto something a bit more concrete here.


"I called Denku to see if he wanted to turn these songs into an album. He was excited and on board with it. So, I reached out to Augury to see if he'd be with it. He was, also, on board. We reached out to producers we've been down with to craft the remaining sound [who] all contributed to helping us create our most complete and mature effort to date," Short Fuze explained. BBQ & CHAOS is seriously one hard-as-nails, often Jazz-indebted return to form for W.A.S.T.E.L.A.N.D.S. and honestly, it kinda just sounds like three old friends having a damn good time! BBQ & CHAOS is now available to stream, purchase, or download exclusively at ShortFuzeRaps.com. However, BBQ & CHAOS will soon become available on additional digital streaming services, as well with CD's and music videos planned, as well. Short Fuze recently uploaded BBQ & CHAOS to Bandcamp, along with the rest of W.A.S.T.E.L.A.N.D.S.' back catalog; plus, an exclusive digital re-release of 2001's "local album," Seasons Change, with a new re-sequenced tracklist and updated artwork designed by DJ Jazzpants. It's safe to say, it's officially #WASTELANDSseason, my friends!!!