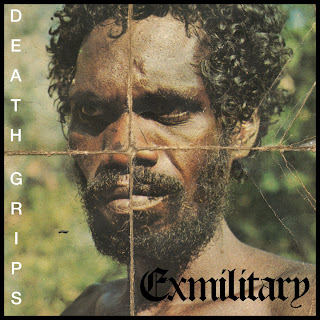 After watching "Beats, Rhymes & Life" (Michael Rapaport) this fine evening, I soon realized that A Tribe Called Quest and Death Grips are actually 2 very similar entities: Pioneers of the new sound - Simple as that. Now, I could try to compare Death Grips' overall sound to some over-saturated commercial bullshit like say, M.I.A. Odd Future, DMX, Beck, [insert additional clichés,] etc... or attempt to slap some sort of half-assed genre tag on it. But that really wouldn't do either party a lick of justice whatsoever; With that said, it's damn near impossible to sufficiently describe the sounds [barely] contained within Sides A-B of the FRESHLY-pressed Ex-military cassette tape.