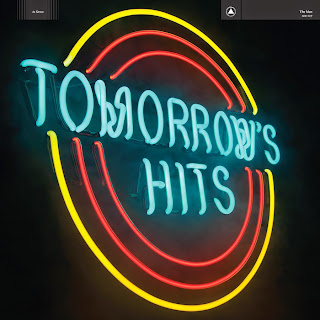 While I wasn't exactly a fan of The Men until about two months ago, I had heard that they generally put out records at a Beatles-like pace, every year to two years tops; their most recent album, Tomorrow's Hits, the follow-up to their critically-acclaimed 2012 collection New Moon, is my first experience with The Men. It's an album I bought on the sheer strength of three of eight pre-release tracks, a vinyl package which came complete with a black-and-white numbered faux-review splattered cover, limited edition crimson red vinyl, giant fold-out poster, Tomorrow's Hits iron-on shirt decal, and more included goodies. Sound-wise, it's an interesting track-by-track trip through a wide variety of styles ranging from Bruce Springsteen & The E Street Band-like Blues-Rock boogie, feedback-drenched Electro-Punk, Bob Dylan reminiscent Country-Rock jams, a sparse piano & harmonica ballad, twangy hyper-speed Rock "N" Roll, righteous Post-Punk, etc; at it's best, Tomorrow's Hits is haphazardly splattered with sonic undertones of both Springsteen and pioneering jam-band Phish along with various shades of Dylan. While my personal favourite horn squawk-accented monstrosity of a Neo-Classic Rock track, "Another Night" has yet to receive a proper music video accompaniment, The Men unleashed the prize-winning fan-directed video for "Different Days" last week. The Men and their label, Sacred Bones ultimately chose German-born director Helge Mundt's treatment as the contest winner, who received a special one-of-a-kind Tomorrow's Hits test pressing and his "Different Days" video creation gets an official stamp of approval (a coveted Sacred Bones YouTube upload). "Mundt's video follows a bearded, skateboarding photographer as he spends his days snapping photos and his nights swigging vodka in his living room. He later falls from a tree, hurting his ankle, and then spends most of [the video] drunkenly dancing in his apartment," as contest web-host Consequence of Sound perfectly puts it. Tomorrow's Hits is now available at your local record store/Best Buy and trust me, it's one of the most enjoyable, varied records I've heard in quite a long time!

Posted by Matt Horowitz at 7:33 PM