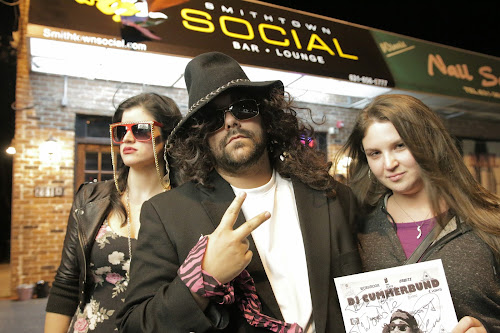 "Hi Matt... thanks for your interest in my work. While now is not the time to reveal everything, basically, the majority of my mash-ups that I've done connect to each other on several levels and tell a large, arcing story centered around the pursuit of pleasure, knowledge, and overall happiness in one's life. I've been dropping hints (Easter eggs) in each (starting from the "Uptown Funk" Macho Mix) that are pretty much impossible to find, unless you know what you're looking for, which I'll end up giving clues for at a later date... Twaddle.

This particular song deals with a portion of the story involving a young woman named Rhonda Garbanzo (hence, the usage of The Beach Boys' hit... couldn't find many songs with the name "Rhonda" in it) that finds herself close to death (hence, "Stairway [to Heaven]") after many years of abusing her body and ultimately, her soul. She is promiscuous, a severe alcoholic, and manipulates others—hence, the usage of "The Pretender" and "Super Freak." I can't reveal yet her role in the overall story, but it is significant, as she gets wrapped up in the schemes of an equally toxic individual... a hunky sailor named Charles Murphy Pebblesby. This worked perfectly with the Rick James/Chapelle's Show skit footage. Almost like it was meant to be," DJ Cummerbund wrote within a rather detailed statement sent to The Witzard by way of his handler, J. Gary Gildersleeve.

It all started one fateful day, earlier this week, when Foo Fighters shared DJ Cummerbund's "Freaktender" on their official Facebook, Twitter, and Instagram pages accompanied by nothing more than the exclamation, "F**K YES;" as a matter of fact, it seems as though DJ Cummerbund's Rick James, Foo Fighters, The Beach Boys & Led Zeppelin-featuring "Freaktender" (Foo Fighters' "The Pretender" + Rick James' 1981 hit "Super Freak") was quietly uploaded to his personal YouTube page at some point on Saturday, December 10th and has since received 87,250 views and counting. When asked to briefly describe his typical audio-video mash-up creation process, DJ Cummerbund (through Gildersleeve) further detailed: "from a technical standpoint, I start with the audio and get it to a point where the song is about 70% mapped out. At that point, I start vibing and meditating on the video, which in turn, breeds new ideas that ultimately, get worked into the audio." Mr. Cummerbund then said at that point, he generally finishes "by trying to figure out how much of Randy "Macho Man" Savage is necessary to tie things together to the overall story, which in the case of this song, was not much."

It appears as though "Freaktender" is merely just the latest piece in an ever-evolving sight and sound mashing-up narrative, which even his closest confidant and handler J. Gary Gildersleeve isn't fully aware of just yet; "there is apparently a lot more to the overall story... much of which I don't understand... though, I'm "not supposed to yet." DJ Cummerbund's previously released arcs within his ever-evolving storyline include (but is not limited to) Rush & Kelis-fusing "YYMilk," Rick Astley & Bon Iver-melding "Never Holocene You Up," evil clown-infested "Stacy's Mom Pt. 2," "The Sound of Smash Mouth," Barenaked Ladies, DMX & "Talk Dirty to Me"-juxtaposing "Chickity China," Queen+David Bowie & Nicki Minaj-delivered "Under Starships," and his utterly hilarious Levi's Jeans-sponsored Nickelback-bashing "PantsFeet." DJ Cummerbund tells me that "at some point," he would ultimately, like to release a proper Girl Talk Night Ripper-style mash-up album and added that "there are many more pieces to the story that need to be told!"