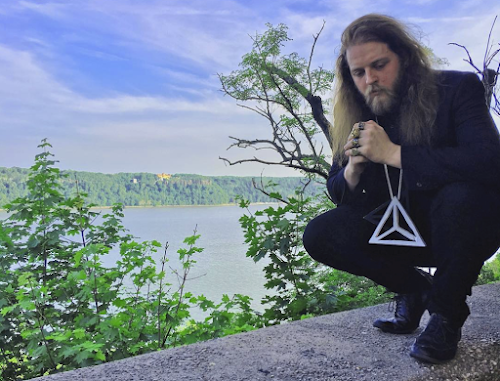 "In my early life, I forced break-throughs in danger to myself. I left these methods behind after realizing that everything I needed for self-discovery was already within me. I purged the facets of my being by compartmentalizing them into these living representations: The Beholder's Trinity. I needed to know who I was in order to understand who I could be. "AYAHUASCA" is my journey of self-understanding. It is my absolution. It is my sacred ritual," Occult Rap originator Mahatma Crowley wrote within a recent statement. "AYAHUASCA" is the first part of a seven-part "visual story that will play out over the course of 2017" to accompany Crowley's 2015 debut, THE BEHOLDER'S MARK [PROJECT 1] and its recently unveiled follow-up, iLLMAGIC [PROJECT 2]. I'm ecstatic to be premiering "AYAHUASCA" today, here at The Witzard, on December 22nd, The Winter Equinox—as was iLLMAGIC released on The Autumnal Equinox, September 21st. Even the self-described "Occult Rapper"'s chosen nom de plum is a clever contradiction unto itself; a Marilyn Manson-esque amalgamation of Mahatma Gandhi and Aleister Crowley. For those who have yet to hear any of Mahatma Crowley's output, I would almost best compare it to something in-between DMX's unique brand of grizzled, often bark-delivered early 2000's Hip-Hop and Death Grips' Hardcore Punk-inspired Noise-Rap (which I affectionately like to refer to as "Aggro-Rap"). Let's just say: "AYAHUASCA" may not exactly be what you might have grown to expect from your typical Hip-Hop video! #BEHOLDTHEMARK


"Sonically, Young Thug and Danny Brown were very impactful for me. There’s no one else executing experimentation in such a refined way. Vocally, you know it’s them as soon as they show up on a song—I think that’s so important today. They bring such a strong energy to their work and innovate on structure itself. Lyrically, Tomas Kalnoky of Streetlight Manifesto and Jay Electronica have been inspiring. I heard Act I: Eternal Sunshine (the pledge) in 2008 and it really busted my head open... I knew then that when recording with my friends in a basement, I wanted to shift from talking about things I didn’t do and didn’t have, to saying something that actually mattered. Overall, without hearing Chance The Rapper, without Acid Rap, I never would have dropped public-facing tracks, simple as that. I would bump that album and people would ask me if he’s serious. I knew I wanted to illicit the same emotion in others: divisiveness," Mahatma Crowley insightfully replied when asked to detail some of the greatest influences on his Occult Rap sound within a featured interview right here at The Witzard. THE BEHOLDER'S MARK [PROJECT 1] and iLLMAGIC [PROJECT 2] are currently available for downloading and streaming purposes. Mahatma Crowley's next release, [PROJECT 3] is expected to be unveiled sometime during 2017. Merry Christmas, ghouls & gals!!!