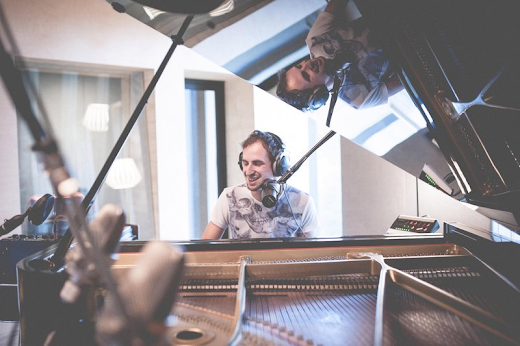 Music really is a powerful entity that connects people across the world every day, as cliché as it sounds. Case in point: I think I first discovered Donuts-flipping Kiwi Basement Funk pioneer Jeremy Toy, who records as Leonard Charles, whilst scrolling through live screen-printing crate diggers HIT+RUN's Instagram page. Leonard Charles' phenomenal Basement Donuts, in turn, pointed me in the direction of Indian Classical band Jaubi's Stones Throw-highlighted "Time: Donut of The Heart" cover... now, are you still with me? Jaubi recently re-released their The Deconstructed Ego EP on Poland & London-based Astigmatic Records and the Hip-Hop and Jazz-melding collective spotlighted within this very piece, Electro-Acoustic Beat Sessions (EABS), are their Astigmatic Records label mates! "The first single from the album Repetitions is the song, "Waltzing Beyond," which was first released on vinyl by Columbia Records in Germany, thanks to the influence of Joachim Berendt... Krzysztof Komeda composed "Waltzing Beyond," originally a poem written by Polish Nobel Prize winner Czesław Miłosz titled "Piosenka o końcu świata" (read: "The Song On The Day The World Ends")," Astigmatic Records wrote within their recent English-translated "Waltzing Beyond" press packet. EABS are an eclectic 9-member group based out of Wrocław, Poland, which according to pianist, keyboard player, singer, and emcee Marek Pędziwiatr, has morphed over the years from a loose club-minded jam session "event" into a full-fledged, actively recording and ever-evolving band. I was lucky enough to get into Marek's head, as I have with Leonard Charles and Jaubi's guitarist and kalimba player Ali Riaz Baqar, for a comprehensive 10-question interview, which spans everything from legendary poet and Hip-Hop forefather Gil Scott-Heron to Donuts & MADVILLAINY mastering engineer Dave Cooley and just about everything else in-between; so, without further ado, please feel free to sit back, relax, and enjoy my recent conversation with Electro-Acoustic Beat Session's own Marek Pędziwiatr, my fellow crate-diggers!

I. Would you care to go through the members of Electro-Acoustic Beat Sessions and briefly detail each members’ role within the band?

To be honest, there are nine members (out of which, seven are musicians). First of all, let me introduce [Sebastian Jóźwiak], who is our spiritual link, friend, and manager. When we believe, he believes twice as much. Bartek Oles is our sound engineer; he is always with us, because without him, we don’t sound like Electro-Acoustic Beat Sessions (EABS). Spisek "Piotr Skorupski" Jednego is one of the EABS [founders], DJ, and beat-maker. He is responsible for cuts, samples, and percussion. Marcin "Raq" Rak is a drummer; he brings the fire to our music. Pawel "Wuja" Stachowiak is a bad cat from the small town of Mosina; he plays bass. Jakub Kurek is [our] trumpet player; he’s a friendly, humble, hippie guy... but onstage... [he's an] ANIMAL! Next, Olaf Wegier. He plays tenor sax; believe [it] or not, it’s hard to find such a soulful sax player in Poland. Last but not least, me, Marek Pędziwiatr. I play grand piano, keyboards, sing, and rap. I also create compositions and arrangements for the band.


II. How does "Waltzing Beyond" fit into the overall narrative of your upcoming album, Repetitions (Letters to Krzysztof Komeda)? Who exactly was Krzysztof Komeda, for those who may not know?

"Waltzing Beyond" is the composition originally inspired by Polish poet Czeslaw Milosz's poem, "The Song On The Day The World Ends." Here is an excerpt:

Though the poem was written in 1944, it reminds me of Gil Scott-Heron’s [1970 poem and song,] "The Revolution Will Not Be Televised." This is a proof of how this idea wanders through the generations. Now, we are here; constantly existing in schemes, which control our thinking. Therefore, we are unable to go BEYOND the circle of information. This thought is also the key to the entire album. If I had to describe this album in keywords: knowledge, love, togetherness, war, and peace. Krzysztof Komeda is the heritage of Polish & World Jazz. He created a perfect blend of Jazz language and Slavic Soul. That is why we feel so emotional with his craft. We feel connected. Speaking of Polish Jazz, we can distinguish two [distinct] eras: before and after Krzysztof Komeda.


III. How did you initially get in touch with Donuts & MADVILLAINY mastering engineer Dave Cooley, who mastered your recent single, “Waltzing Beyond?

As far as [mixing was] concerned, we put to the test three separate engineers, who worked on raw tracks of "Waltzing Beyond." The winner was Paweł Bartnik from Heavyweight.pro. Thus, we decided to pick someone who [would] take care of mastering. We were hesitating between Daddy Kev and Dave Cooley. Mainly, because they dealt with the ultimate sound of albums we love (e.g. Yesterday's New Quintet, The Heliocentrics, etc.) Eventually, we chose Dave Cooley, who knew from the beginning what he [wanted] to do with it. How did we get in touch? Some time ago, Dave did mastering of a 7-inch dedicated to J Dilla called 100206 EP by Galus. Galus is our friend. When we asked him about Dave, he suggested that it might be perfect for what we [wanted] to achieve. Later, we got Dave’s contact from Egon of Now-Again. Ultimately, Dave Cooley will master whole Repetitions album.


IV. What’s next for Electro-Acoustic Beat Sessions? When exactly do you plan to release your PUZZLE Mixtape follow-up, Repetitions (Letters to Krzysztof Komeda)?

Cassette PUZZLE Mixtape closed a period of jams at the club. EABS turned into a band and after five years of playing together, we were able to go to the studio and record our debut album. Repetitions is costing us a lot of work. What is more, it requires meeting a fairly large number of people, which is why this project takes time. Although we are living in the digital world, here [in Poland,] the work process is quite analog. We hope that we will be ready with this material in the beginning of March 2017.


V. What were some of your greatest influences during the recording sessions and creation of your PUZZLE Mixtape and Repetitions (Letters to Krzysztof Komeda)?

Speaking of PUZZLE Mixtape, the main influence [was] dreams. We payed tribute to Rap, Soul, and Jazz artists playing their music. Finally, we ended up with them on stage (e.g. Jeru The Damaja). That’s it! While working on Repetitions, we had to focus more on concept than on styles. That is why while preparing arrangements, I studied film dialogues, poems, and all the contents that had to do with Komeda’s musical material. I was definitely inspired by David Axelrod, Gil Scott-Heron, [John] Coltrane, and The Last Poets. However, in some places, it’s hard to define what style is it... it’s just music!


VI. How did you get your band name and where does its inspiration come from? It kinda reminds me of Madlib’s one-man “band,” The Last Electro-Acoustic Space Jazz & Percussion Ensemble!

Initially, Electro-Acoustic Beat Sessions was an "event." There were many jam sessions in Wrocław, but we realized that there was no room for soulful vibe. So, we found our home: PUZZLE Club. After some time, we realized that actually, we are not an "event," we are the band. Finally, we decided to quit switching hosts with other players, as in jam sessions. We play Electronic and Acoustic instruments, we love Beat music, our concerts are like spiritual Sessions—we love to share magic with people and we love Madlib, as
well.


VII. What was the typical recording process like for your PUZZLE Mixtape? Were you ever in the same studio as its featured emcees, like Stones Throw’s M.E.D. and Brooklyn's own Jeru The Damaja?

There was no studio recording. Everything was recorded live on stage—no gimmicks. With most of our [all-]star guests, we met on soundcheck to skip through the songs. Then, the gig was full of unexpected situations. It was so exciting! We got used to these situations and loved to have fun with them.


VIII. I know your PUZZLE Mixtape was released on limited edition cassette tape and FREE digital download, via Astigmatic Records, but do you have any current plans to press it up on vinyl? Will Repetitions become available in a wide array of formats, as well?

PUZZLE Mixtape will remain as it is: cassette and digital. We agreed with our guests, we spend this material without profit, only to promote EABS and to close our old period of jam sessions. Unfortunately, vinyl is a very expensive media, so we could not afford pressing vinyls to give it away for FREE. However, the situation with Repetitions is completely different; it is a conceptual studio album. Here, we act in accordance with the heirs of Krzysztof Komeda and all copyrights. The album will be released on double vinyl, CD, and digital.

These pieces document our explorations through the world of soulful music. All are live recordings. "Thank You, [Dilla]" is the [tribute] to "The Funkiest" J Dilla. I remember this session: there [were] six horn players on stage, each playing solo. It was a song with no ending... beautiful. "Medley" is a [tribute] to Common and Bob James. I love the way this song is blooming. "Sh*t Is Real" is dedicated to all true Hip-Hop heads; those who remember Fat Joe Da Gangsta know what I’m talking about. "Każdy Ponad Każdym" is our interpretation of the Polish Rap classic by Sokol. This magical recording comes from a very special concert, which was the tribute to White House (legendary Polish producers).


X. It’s nearly that time of year wherein many publications, myself included, will start compiling Best of 2016 and year-end lists; with that said, which releases from the past 12-18 months might you likely include on such a list… any favorite Hip-Hop releases, in particular?

There’s a lot going on, especially in Jazz. And maybe it’s more about phenomena than particular releases. [Robert] Glasper, Austin Peralta, Flying Lotus & Co. Kamasi Washington... and the whole LA scene. There is Kendrick, who [pairs] Hip-Hop and Jazz in a futuristic way. Look at the UK scene—they [have] Yussef Kamaal!
Posted by Matt Horowitz at 5:51 PM