Guts of The Ice - An Exploration of "Puck" Rock/Hockey-core #4: THE ZAMBONIS' Co-founder Dave "Zamboni" Schneider (The Witzard Interview) 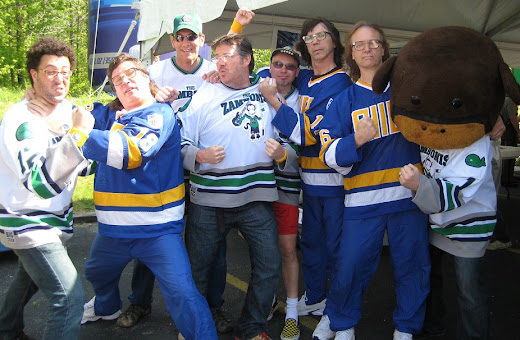 This week's featured artist, THE ZAMBONIS are widely known as "the greatest and only ALL-Hockey Rock band." THE ZAMBONIS' current line-up consist of Dave "Zamboni" Schneider, Cary "Twangy" Pollick, Alex "Swifty" Swift, Nick "Stick" Morcaldi, and Matt Gonzalez AKA The Hockey Monkey; members "ON THE BENCH" (still called in to play gigs) include Tim Walsh, Tarquin Katis, Peter Katis, Shawn Fogel, Tom Andrukevich, Steve Tanski, Bob Anderson, Rich Dart, and Mike Sembos. Since forming in 1991, THE ZAMBONIS have penned both official/unofficial anthems for The Colorado Avalanche, The Boston Bruins, The Hartford Whalers, and The Pittsburgh Penguins. In 2002, the band played The NHL All-Star Game at The Staples Center in Los Angeles alongside Jewel, Five for Fighting & Unwritten Law. THE ZAMBONIS have played shows with Two Man Advantage, Jonathan Richman, Atom & His Package, Chris Frantz & Tina Weymouth from Talking Heads/Tom Tom Club, Guster, and "toured with" The Stanley Cup. THE ZAMBONIS' music has been featured in Blades of Glory, Nickelodeon's KaBlam!, Last Days of The Coliseum, NBC Sports' Puckland, and FOX's short-lived The Loop. We were fortunate enough to speak with THE ZAMBONIS' Captain/guitarist Dave "Zamboni" Schneider for this installment of Guts of The Ice. Schneider was kind enough to put together a comprehensive Spotify playlist for us entitled Dave & THE ZAMBONIS' Punk Rock & Hockey-core Hits for The Witzard. Stay tuned for our interview with the world-famous Hockey Monkey dropping later this week!

Dave Zamboni: Hockey started for me with my dad taking me and my two brothers to games at the now-blown up New Haven Coliseum; the home for The AHL's New Haven Nighthawks. That was in the 70's. Punk was handed down to me by my older brother. It all started with a cassette he had gotten from a friend from Australia: The Damned, Boomtown Rats, The Clash, and The Saints. It was exactly what I needed to get me charging in a good direction, musically.

Zamboni: 1991: one of my favorite band was The Philistines, Jr. It was a band from [Connecticut] that was made up of two brothers, Peter & Tarquin Katis. I ended up becoming friends with them and realized, I HAD to be in a band with them. We all liked hockey. The Philistines, Jr. flew to England on an invite to do a Peel Session by one John Peel, himself. I went with them. While there, we wanted to watch a hockey game. We looked everywhere in the city of London but, NO HOCKEY to be found. I suggested we should write a song about hockey instead. Tarquin said, "awesome," Peter said I was "an idiot" and the band started that night. 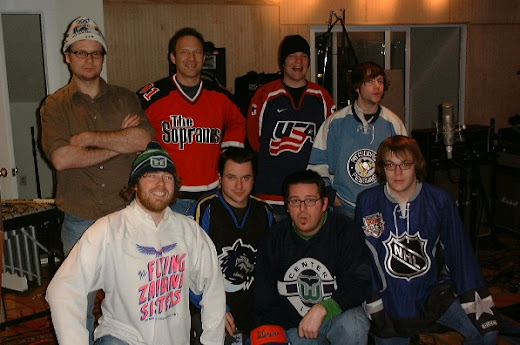 Zamboni: We have a brand spankin' [new] record coming out on September 13; more songs about nothing but hockey. We are playing a private hockey banquet in Boston in March (we are a hockey band, why not?) and playing with The Figgs in New Haven, CT at Cafe Nine on April 18th. We are, also, incredibly excited to release the first-ever puck with Don Rickles' face on it (true story)

06. What would you, likely, deem your favorite hockey/sports-related event or gig THE ZAMBONIS have been asked to play?

Zamboni: Playing The NHL ALL-STAR GAME 2002 at The STAPLE CENTER in Los Angeles, CA. Sang from atop the zamboni in-between periods. The whole NHL ALL-STAR [team lined up] outside of our dressing room, awaiting to go out on the ice. Jagr, Lemieux, Roy, Federov, etc. etc. On the other side of the hall, the entire 1980 USA Hockey team, also, waiting to go out as a special tribute to them. We had huge headaches from smiling that night.

1.) Playing the most hockey wedding ever in Boston. Groom's Family vs. Bride's Family on the ice. Priest was the ref. Everyone on skates. Game finishes (Groom's won) We ZAMBONIS set up on the ice, play a full set, while everybody else puts the skates on and enjoys the hockey music. We played, they skated.

2.) Playing one of the many Dennis Leary benefits he does to benefit firefighters. This one was in Worcester, MA benefiting six firefighters that, sadly, lost their lives. Tons of celebs at the event and we skated with them, too. At the end of the night, we went to say "goodnight" and "nice meeting you" to the great Bobby Orr and he made our lives complete by calling [us] "a bunch of whacky singing hockey nuts."