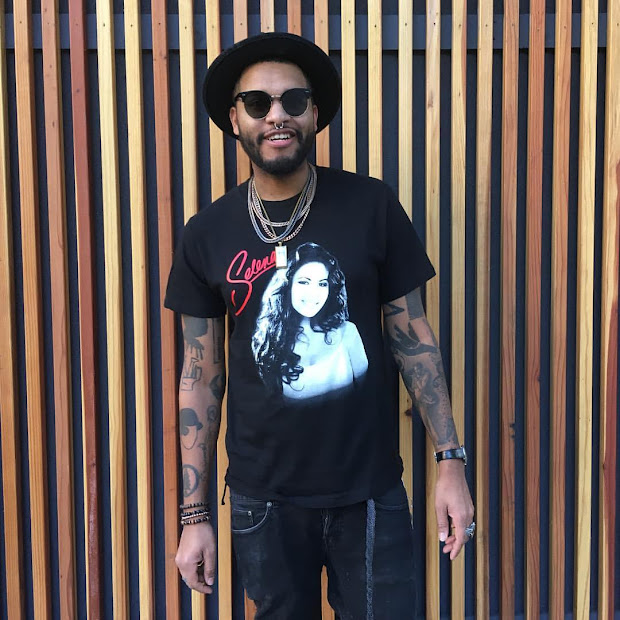 Back in 2019, Los Angeles emcee Alex Ludovico continued his ongoing #MedicineMondays weekly singles series and last year, he did something similar with #RewindWednesdays. His Bandcamp page explains, "Drugs, sex, and Hip-Hop. Alex Ludovico, born in Gary, IN and created in Chicago, is the living embodiment of that credo." One of our personal favorite moments from 2019's #MedicineMondays roll-out was Ludovico's collaborative EP with fellow Chicagoan Jason Griff entitled Scarf Tissue. Upon returning from our honeymoon to Italy, we immediately linked up with Griff & Alex Ludovico, via email, to talk about their phenomenal Scarf Tissue EP. They were kind enough to help us assemble a comprehensive track-by-track (All-around) Breakdown for Scarf Tissue. Not long after, following a string of one-off singles, Alex Ludovico & Jason Griff returned with the first proper EP of #RewindWednesdays, THE RED MAN IS HERE. RUN.

For THE RED MAN IS HERE. RUN. We got a chance to interview Griff & Ludovico about their THE RED MAN IS HERE. RUN. EP and then-newly formed group FEDXRA BXYS (pronounced: "Fedora Boys") with Scorcese Lorde Jones. It pains us to report that Scorcese suddenly passed away earlier this year, but it sounds like Griff & Alex Ludovico plan to continually honor Scorcese's memory with their joint imprint, Insubordinate Records. Earlier this year, Griff & Ludovico returned once more with their third collaborative EP, ThreeOneTwo, which featured Scorcese on closer "Candy Tangerine." For Alex Ludovico's latest release, long-time friend and fellow emcee/producer Zilla Rocca stepped into to help curate Cocaine & Therapy. It's a 12-track playlist-style compilation album fully arranged by Zilla re-collecting his favories from 2019's #MedicineMondays into a proper concept album. We couldn't get Zilla Rocca on the line... but Alex hooked us up with an interview on Cocaine & Therapy, FEDXRA BXYS, Scorcese's legacy, ThreeOneTwo, YTBOI, and much, much more.


I. When and how exactly did your musical/working relationship with Zilla Rocca initially start?

Alex Ludovico: We met back in The Internet Dark Ages, commonly known as "Rap Blogs." A site posted my album and Zilla reached out to tell me he enjoyed it. I jumped on a record he sent me and it's been quite the fruitful relationship ever since.

II. You two have worked together a number of times in the past, correct? Where can fans find these past collaborative efforts?

Ludovico: We've collaborated so many times, it's hard to make a list, but everything is available on either Insubordinate Records or Three Dollar Pistol Music.

III. What made you decide to jointly release Cocaine & Therapy on Zilla Rocca's label, Three Dollar Pistol, as well as your own Insubordinate Records with established with Scorcese Lorde Jones (may he Rest In Peace) & Jason Griff?

Ludovico: We've all been focused on building our respective labels and establishing a solid business model. So, Zilla put together this awesome compliation. It only made sense to release it as a joint project.


IV. Along with Cocaine & Therapy, what inspired you to release a CD-only version of your recent ThreeOneTwo EP packaged along with your previous two Griff-produced EP's THE RED MAN IS HERE. RUN. & Scarf Tissue?

Ludovico: I'm a child of the 90's, so I have some nostalgia attached to CD's. Also, it's a great way for people to show support that doesn't break the bank.

V. Prior to Scorcese's untimely passing, you, he, and Griff had formed a super-group of sorts, FEDXRA BXYS. What did your fellas have in store for the world and when might this material be released?

Ludovico: We're currently busy just combing through all the material that was left behind. So, there's no dates set to anything or any projects. Also, there's no rush on putting anything out, as we are taking great care of Scorcese's legacy and making sure all product released is top-notch.

VI. Cocaine & Threapy is a concept album hand-curated by Zilla Rocca from your weekly #MedicineMondays2019 series. What inspired this whole idea to come to fruition as a proper album?

Ludovico: All Zilla's idea. He happened to make a playlist out of his favorite songs I dropped during the #MedicineMonday run. He picked the songs, sequenced them, and voilà... an album!


VII. What can you tell us about the "origin" story behind Zilla Rocca-produced "Sick Yo' Duck," which re-appears within Cocaine & Therapy?

Ludovico: "Sick [Yo'] Duck" is just what the nightlife was [like] pre-COVID. Just going out, meeting beautiful women, and participating in some adult fun. The second verse was for dudes who are too creepy and just giving them advice.

VIII. Without giving too much away, can you walk us through a bit of the actual concept behind Cocaine & Therapy established throughout the course of the album?

Ludovico: Zilla sequenced the album to show the arc of party, to collapse, to realizing how to receive help and help others. It's a fascinating dive into my psyche.

IX. What can you tell us about the Cocaine & Therapy CD (with 2 bonus tracks!) and "Freud" companion line of men's and women's merch?

Ludovico: It's got a couple of bonus tracks, one of which features the great Handsome Boy Banks. And the Freud merch is my way of honoring The Godfather of Psychoanalysis.


X. Do you have any immediate plans to do something similar to your Cocaine & Therapy comp. for your #Sixteen16s/RewindWednesdays2020 singles series, as well?

Ludovico: Not as it currently stands, but if someone wants to make a compilation of the tracks, I'll gladly help sell it.

XI. Would you mind speaking a little bit about Insubordinate Records' upcoming releases: Fireside Chats compilation from Jason Griff, YTBOI album from yourself, and the Scorcese tribute album?

Ludovico: A little too early to talk Scorcese tribute record. Fireside Chats is gonna be a firebomb dropped into the world featuring all your favorite rappers. And YTBOI, it is everything you love about Alex Ludovico, "turned up to 11," including some very big features that I'm not quite ready to share just yet.

XII. Now that Cocaine & Therapy has been unleashed into the terribly unsuspecting world, what do you have planned next, Alex?