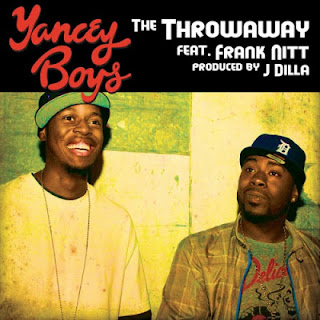 "The Throwaway" was either lifted off an old mid-90's Beat CD or DAT, which might've come from J Dilla's hometown storage locker that Jeff Bubeck infamously stumbled upon last April. After a little bit of Internet-fueled confusion, Dilla's personal effects were rightfully returned to his mother, Maureen "Ma Dukes" Yancey - This including: nearly 8,000 vinyl LP's, pieces of mail, Slum Village paperwork, hand-written notes, and a gaggle of cassette/Beat CD-R's, etc. "The Throwaway" is out first audio-file snippet from Delicious Vinyl's upcoming Frank Nitt-orchestrated Yancey Boys album, "The Lost Scrolls" (2013). It's the fifth posthumous J Dilla release... right behind The Shining, Jay Love Japan EP, Jay Stay Paid, and Rebirth of Detroit. Frank Nitt and J Dilla's little brother, Illa J, decided to cruise around LA and visit some of Dilla's favoutite sun-soaked landmarks, which Josh Polon ended up filming for the music video. "The Throwaway" b/w instrumental and accapella edits is now available for $4.00 over @ Amazon; Stones Throw, on the other hand, is currently fulfilling pre-orders for a re-packaged version of Donuts (2006) in a nifty little #VERY RARE 45 box set, slated to ship out on Jan. 14th.


"When Illa J played me what he'd done with Dilla's track, I thought it was incredible. I was suggesting other MC's who could jump on the track, but Illa J told me he wanted me to rhyme on it, so who was I to disagree? ... Fact is, a lot of beats J Dilla made were on tapes or discs that weren't always labeled with the date. But I believe the beat for "The Throwaway" dates from the mid-'90s, just from the tempo and where Dilla was at creatively. To me, it feels like the heat he was giving The Pharcyde [1995] at that time."

Posted by Matt Horowitz at 8:55 PM