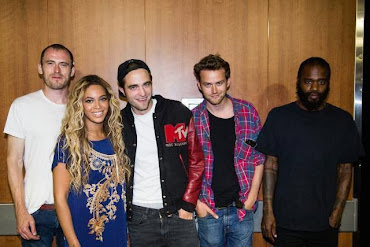 Although it might seem like a pretty mis-matched pairing at first, Bob Dylan & Death Grips have more in common that you or they'd really like to admit. Dylan was the first Folkie to "go electric" and Death Grips have largely forged their own ground in their Proto-Rap sub-genre; Dylan never really adhered to generally-accepted social norms and the same could be said for deathgrips; Both artists make the kind of music that you either love or hate, there's no middle-of-the-road fans. Uploaded late Wednesday afternoon without any prior notice, Government Plates is Death Grips' fourth overall album (counting Ex-military) and the second self-released in such a guerrilla manner. Death Grips simultaneously uploaded 11 motion picture/music videos to YouTube, one for each album track, which may be part of drummer Zach Hill's long-rumored short film. "You might think he loves you for your money but I know what he really loves you for, it's your brand new leopard skin pillbox hat" and previously released "Birds" seem like the most music video-like clips of the bunch, most of which feature re-purposed 3-D models from BlendSwap. The former name-checks Bob Dylan's similarly-titled "Leopard-Skin Pill-Box Hat," but that's about as far as the visual comparisons go; sadly, there are no lyrical cue cards here. While I have yet to give Government Plates a proper full-album run-through, it does seem to have a much more polished, semi-refined sound quality that the band's previous output. It's now available online for download at either Soundcloud, Megashares, The Pirate Bay, etc.