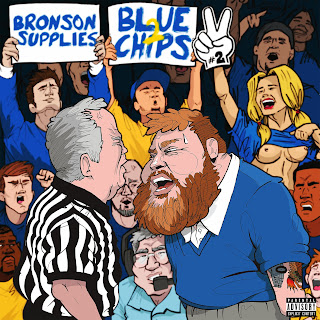 "If you want to laugh, cry, jerk off, take a shit, this is the music you want to have playing," Action Bronson recently told Rolling Stone of the general aesthetic for his upcoming VICE Records (Warner Bros.) album. "This is for when you're comfortable with who you are - whether it's your dick size or your tit size," which is actually a pretty good assimilation of Bronson's overall musical feel. His rap schemes are more often that not littered with vague references to mid-90's sports, pro wrestling, gourmet food, exotic women, "wax" [weed], etc. Action Bronson has somehow managed to release 7-8 albums/mixtapes over the course of the past few years, and I think it's justifiable to ay that his just-released Blue Chips 2 (November 1st) just might be his magnum opus. Even though a handful of Blue Chips 2 tracks were pre-released as early as January 2012, Party Supplies' slightly left of center anti-Hip-Hop beats are pretty fucking immaculate; now, we're talkin' about virtually un-heard of shit like John Cougar Mellencamp, "Tequila," Peter Gabriel, Tracy Chapman, Phil Collins, Pharcyde, and a sparse "Runnin' with The Devil" a cappella.

"When you hear these fucking beats, this is next. This is not what anybody else is doing. Nobody sounds like this. Motherfuckers are too stuck in some one shit," Bronson lamented to Noisey. "This is how you fucking build a fucking legend. You do ill shit, people love it, and they're fucking constantly talking about it forever. The smart motherfuckers stay around." While I've already seen him LIVE twice in recent months, I'd really like to see Action Bronson on his own full-fledged solo tour, and I'm sure Blue Chips 2 would sounds pretty ridiculous in an arena setting. But it seems as though Bronson is currently taking some time off to straighten up his ailing health and "AS SOON AS [HE'S] BETTER, [HE'LL] BE IN A CITY NEAR YOU SINGING BLUE CHIPS 2." All the while, Action Bronson's slowly been chipping away at his major label "ALBUM" "ALBUM" for VICE Records, as well as various projects with The Alchemist, Funkmaster Flex, and frequent collaborator RiFF RAFF (GALAXY GLADiATORS), and a rumored Blue Chips 2 spin-off with Party Supplies.
Posted by Matt Horowitz at 12:17 AM