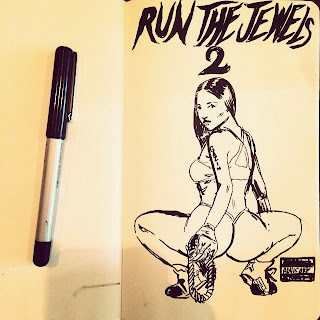 "for those who spent tuesday in a coma or in the wilderness [here's] RUN THE JEWELS "BLOCKBUSTER NIGHT PART 1," @therealelp Tweeted Wednesday afternoon; he's of course referring to the 100 second snippet he and partner-in-crime Killer Mike let loose within the last 36-48 hours. Run The Jewels have been hard at work on the follow-up to their critically-acclaimed self-titled debut, reportedly even recording tracks with Blink-182 drummer Travis Barker and Rage Against The Machine frontman Zach de la Rocha. The forthcoming album, tentatively titled "Run The Jewels 2," is seemingly nearing completion according to El-P's stream of recent Twitter updates; "RTJ2 is one day away from being fully mixed... one song from having #RTJ2 mixed. That's 4 albums in 2 years for those keeping count. f*ck with me." While it's only about a 1:40-long snippet, Killer Mike & El-P still managed to deliver three verses-worth of sharp-tongued one-liners: "Bunches and bunches, punches is thrown until you're front-less... I'd lend a had, but they stuck in a fist and gun position." Run The Jewels 2 currently lacks a proper release date, but should be expected sooner than later and judging by their initial impression, El-P & Killer Mike's second coming is without a doubt poised to be a ferocious, noticeably "darker" lyrical assault.

Posted by Matt Horowitz at 3:32 PM