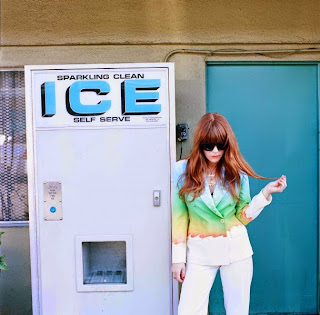 I'll be the first to readily admit that former Rilo Kiley frontwoman Jenny Lewis' latest Beck-produced single, "Just One of The Guys" isn't exactly your typical hyper-aggressive/Boom-Bap fan-fare here at The Witzard. But regardless, you really can't deny the inherent cuteness behind Anne Hathaway, Kristen Stewart, and relative new-comer Brie Larson (21 Jump Street) acting as part of Lewis' faux all-female backing band. For those not familiar with Rilo Kiley, Jenny Lewis' past solo work, or her guest appearances alongside The Postal Service and Bright Eyes, I'd almost sonically equate "Just One of The Guys" to Hole's 90's-early 2000's lighter side or for lack of a better term, Soft Chick Rock. I'm not entirely sure if Jenny Lewis was in charge of the ladies' "business casual" white and rainbow accented pant-suits, but she definitely self-directed it's colorful video... which oddly enough, manages to juxtapose stark performance clips against footage of Lewis, Hathaway, Stewart, and Larson trotting around like rejected Fred Durst look-alikes (Adidas jumpsuits and all). Jenny Lewis' upcoming album, The Voyager, her first record in some six years, was collectively produced by Ryan Adams, Mike Viola, Beck, and frequent collaborator Jonathan Rice; "After Rilo Kiley broke up and a few really intense personal things happened, I completely melted down. It nearly destroyed me. I had such severe insomnia that, at one point, I didn't sleep for five straight nights. Many of the songs on The Voyager came out of the need to occupy my mind in the moments when I just couldn't shut down... This record was the hardest one I ever made. The Voyager tells that story: the longest night of my life and the journey to finally getting some rest." The Voyager will become available at the end of the month, July 29th, while the 12x12" LP version is currently available for pre-order at Urban Outfitters for a mere $24.98!

Posted by Matt Horowitz at 9:26 PM