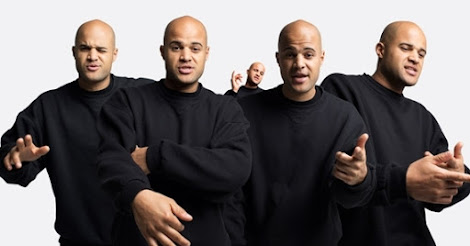 "It was an action-packed few days, Sandman was so patient with the whole thing, it was amazing... The effect in ["Life Support"] is stop-animation; basically, every time anything moved in those sections of the video, we'd move something [and] take a picture. So, that meant pulling apart flowers, petal by petal, in some cases... It was a blast to make... Homeboy Sandman and I have built a body of visuals together and we have a lot of trust in each other. He pushes limits musically and I try to match his intensity with the visuals, while keeping an eye on his humorous side," director @pacerivers told me in a series of recent Twitter direct messages sent on the eve of his latest sun-drenched creation, "Life Support." Homeboy Sandman's just released Hugo XL-produced self-reflective cut is reportedly "a new track, not on any album release, strictly for the video," according to Los Angeles-based imprint Stones Throw Records. Rivers and Sandman have previously worked together on visual accompaniments for "Not Really," "What'chu Want from Me," and "Men Are Mortal" – a mutual appreciation and working relationship dating back as far as 2012, during the roll-out for his full-length Stones Throw "debut," First of a Living Breed.


Not entirely unlike its non-album predecessors "Arrows," "Anything," and "Nonbelievers," "Life Support" is a nearly flawless, impeccable example of Homeboy Sandman's sharp-tongued rhyming prowess; "I think my motivation is broads. I used to tell myself that it was savin' the world. I wasn't really lyin' to myself cause that's what I thought, but I'd be lyin' to say that I don't think more 'bout lyin' with girls," Sandman weaves over Hugo XL's sparse piano-laden beat. Stones Throw's artist description further attests to the sheer simplicity and utter genius of Angel del Villar II's intricate 90's-evoking Homeboy Sandman persona: "His favorite song is "Knocks Me Off My Feet" by Stevie Wonder. His second favorite song is "I Know You, I Live You" by Chaka Khan. His favorite Michael Jackson song is "Lady In My Life." He prefers Low End Theory to Midnight Marauders, but adores both." Homeboy Sandman is currently holed up in the studio, expectedly having the time of his life, putting the finishing touches on his latest Stones Throw album, Kindness for Weakness, which is likely expected to see a release this upcoming spring. Just in case you've been living under a rock (or a heap of deconstructed flowers), I would strongly suggest you check out Sandman's exquisite, yet painfully brief, Mike Shinoda-approved Lice EP released with long-time friend and seasoned touring mate, Aesop Rock.
Posted by Matt Horowitz at 10:26 PM