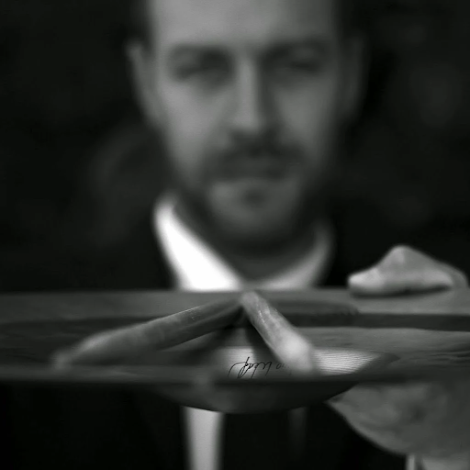 "The PVD Breaks [Vol. 1-2] project started as a way for me to hone my skills mixing live drums in my modest Jersey City studio. The goal was to achieve the sound of classic drum breaks using what I had at my disposal, recording different kits in different rooms, with a variety of mics and mic placements, and really taking it a step further during the mixing process to differentiate one breakbeat from the next," Redefinition Records-deemed "ultra-talented drummer, composer, producer, and bandleader" Pat Van Dyke wrote within a recent emailed statement sent to The Witzard. "I always wanted to release the [2010-12] project on vinyl so that producers, DJ's, turntablists, and beat-makers could really manipulate the music in a variety of ways... as they would an open drum break found in the context of an old record. When Redefinition Records hit me up, I was excited to work with a label who’s had such a long run of quality releases with artists like K-Def, Klaus Layer, and Damu [The Fudgemunk]. I’m grateful for their help in making the vinyl release a reality and for getting the music into the hands of the right people. I also want to give a shout out to Joe Buck for hooking up the artwork and layout for the 12-inch," PVD enthusiastically continued.


Jersey City native Pat Van Dyke (no relation to Dick) has worked alongside John Robinson, Suff Daddy & Mayer Hawthorne, Lux DeVille emcee 8th W1, Melinda Camille, Fancy Colors, and MAX Digatron and has additionally had his music showcased within FOX, NBC, MTV, VH1, Comedy Central sitcoms, and has provided the soundtrack to viral videos from the likes of VICE Magazine and Jerry Seinfeld’s Comedians In Cars Getting Coffee. "I initially released [PVD Breaks] Volume 1 & Volume II on my own (digital only). When Redefinition Records hit me up about releasing the project on vinyl, we re-titled it as simply Volume 1, but included the best breaks from both of the original releases," PVD replied when asked about the project's relation to his 2010-12 Bandcamp-released PVD Breaks Volume 1 & Volume II projects. PVD Breaks, Vol. 1 is fittingly advertised by Redefinition Records as "26 original drum break loops played live by the ultra-talented musician/band leader, Pat Van Dyke; vinyl cut at 45 RPM for high quality playback/sampling; various mic techniques implemented for optimal sound quality; recorded and tracked in different studio rooms for texture/variety." Flea Market Funk founder and writer DJ Prestige enthusiastically attests that "the combination [of Pat Van Dyke & Redefinition Records] is deadly, and if you’re looking for quality, royalty free drum breaks, plus a variety of synths, horns, and keyboards, you came at the right place."

Posted by Matt Horowitz at 6:53 AM