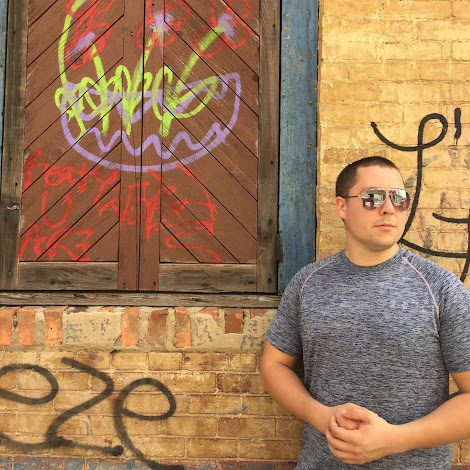 "I can't really say what the title will be, but it should be released as a single in a week or two, depending on what [Jordan Parrish] decides to do with it. I decided to work on it because it really brought me back to the "Hopeless Romantic 1+2" tracks emotionally and it's always nice to challenge yourself to write something new about a familiar subject," San Diego rapper-producer and engineer Mick Boche revealed within our previously published interview a few months back. Long story short, I actually first heard about "disappearing" emcee Boche (then Izaac) from my friend and collaborator John "Jumbled" Bachman, who featured Izaac within a bonus track, "World's On Fire," on his impeccable Baltimore-centric beat-minded album, [I wish it was longer]. Not long after, Izaac's social media accounts were completely wiped and he went dark, unbeknownst to Bachman and I, having left Baltimore and secretly relocated to San Diego re-branding himself as "Mick Boche." John Bachman and I were both eventually able to get in touch with Boche and we talked extensively about his new career aspirations and direction, which in turn, led to the aforementioned interview; somewhere in the midst of all that insanity, Mick Boche introduced me to his friend Jordan Parrish, whom he said recorded "Folk-Pop" music out of Baltimore as Birds With Teeth.

Parrish bills himself on Soundcloud as a "song-writer, singer, multi-instrumentalist, and producer [who's] in the studio right now" working on his debut 7-song EP as Birds With Teeth; while he currently has a number of 1-2-year-old tracks uploaded to his Soundcloud page, including an incredibly chilling lo-fi cover of 311's "Amber," his collaboration with Mick Boche, now having been dubbed "Heat and Sadness," is actively being billed as his first proper single ahead of aforementioned EP. I recently had the opportunity to sit down and ask Jordan Parrish a few questions concerning his work with Mick Boche, forthcoming Birds With Teeth EP, influences and inspirations, and plans to "bring [his] songs to life" with deeply powerful music video presentations. So please, feel free to sit back, relax, and enjoy The Witzard's exclusive premier of Birds With Teeth & Mick Boche's collaborative single, "Heat and Sadness" (or as Boche affectionately nicknamed it, "Hopeless Romantic III") while you peruse quick-strike interviews with both Birds With Teeth mastermind Jordan Parrish and ever-illusive Mick Boche.

I. How did you and Mick Boche initially come to get in touch? You two are both from the same Baltimore area music scene, correct? Well, that's how I actually first ended up getting in touch with you, Jordan, through Mick!

Mick came to one of my gigs in Baltimore with a mutual friend of ours and that night we hung out at my house and talked about music for hours. We found the we both had a passion to really try to improve our skills and make songs that mattered. He left Baltimore shortly after we met, but we've kept in touch. Finding an artist who knows how to buckle down and work hard is always awesome and he's definitely a workhorse.


II. How was "Heat and Sadness" recorded—especially with yourself still living in Baltimore and Mick having recently relocated to San Diego?

Basically, we worked with the magic of The Internet. Both of us have basic home studio setups and we're both constantly working on new songs. I had written the chorus for two other friends of mine, but they didn't have time to work on it because of career changes. I loved the hook and I thought Mick would write something that matched the vibe. I asked him if he'd be willing to write for it, sent him my demo, and he sent back two good verses. This was while both of us were working hard on our own albums, so it took a while to come together.


III. Stylistically, how is "Heat and Sadness" similar or dissimilar to your forthcoming debut Birds With Teeth EP?

“Heat and Sadness" is most different from anything on my EP because it has a strong Hip-Hop influence. Don't get me wrong, I'm a mountain kid from Appalachia at heart and I grew up listening to music from Nashville, but Baltimore has rubbed off on me in the four years I've lived here; you can hear some hints of the Hip-Hop and Neo-Soul new friends have recommended to me. One way it's similar to my EP is that it's pretty somber. The last three years were pretty dark for me, literally, because I spent many months on night shifts. I had so much time to think, often all alone, often at 3, 4, 5 o'clock in the morning. I spent a lot of time pining for the sun and for people and reflecting on life and lots of the songs grew out of [working nights].


IV. What might you likely deem some of your greatest sources of inspiration and influence during the creation of "Heat and Sadness," as well as your forthcoming Birds With Teeth EP?

It's so hard to pin down the influences, but I would have to say, I fell in love with the electric key sounds in Erykah Badu's album Mama's Gun (2000). I also love cinematic music—songs that make you feel like you're living in a movie. It's also influenced by one of my all time favorite albums, The Boy vs. The Cynic (2005), by a fairly obscure rapper named John Reuben. I wouldn't call that album Hip-Hop, definitely Rap—almost like spoken word, at times; more for the NPR crowd than the average Rap album, for sure. The sonic palette of mostly live instruments, sort of a crossover between Pop-Rock and Hip-Hop, went a long way in shaping the way I define good music. "Heat and Sadness" definitely takes some of its sonic design from that album.


V. Do you have an immediate plans to film any sort of music videos or live footage to accompany "Heat and Sadness" or your forthcoming Birds With Teeth EP?

I absolutely love music videos! A good one can bring a song to life in such a powerful way, but a bad one can spoil a song and embarrass the artist. So, for that reason, I want to wait to make a visual until I'm sure I have the resources to do it right. Hopefully, I'll reach that situation sooner rather than later. 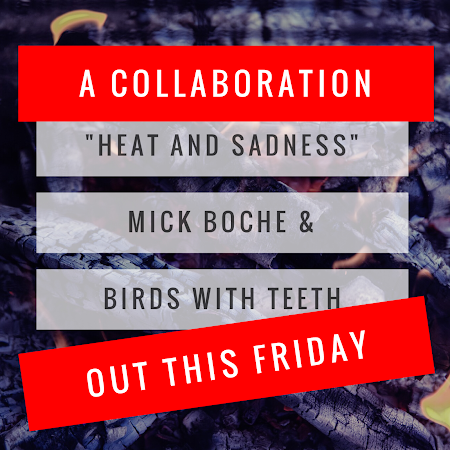 Posted by Matt Horowitz at 7:22 AM