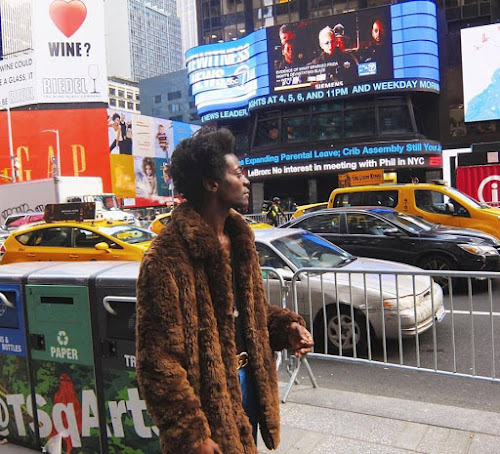 "'System of a Gun" is basically about government corruption; I wrote the song with my girlfriend, who's also in the band, after reading the news. The song reflects today's politics and concerns—especially for the youth of multi-culturalism," London-based African-Spanish Rock "N" Roll revivalist Gutxi Bibang wrote within an exclusive statement sent to The Witzard. He then, went on to quote his own lyrics: "Little by little / Got to get away / A leader on the search to kill today / Dystopia over-runs the ocean / The sand ain't washing up / System on the gun / Gotta serve and obey / The truth only strays / Plague of the system [dysfunction] / Cannot sway / Explain to me 'cause I don't know / Just how could you be so cold." Bibang recorded "System of a Gun," and likely an entire album's-worth of material, along with his American girlfriend Tabatha Beu on bass and fellow London-based drummer Gary Lee; "with his distinctive manner and impeccable style, Gutxi Bibang exudes charisma—not just a reminder of when Rock was a socio-cultural force for change in the 1960's and 70's, but a glimpse into the music’s global future," reads a press release from his self-described "French Indie label" Oskar Recordings.


It quite honestly, wouldn't be too much of a stretch to compare Gutxi Bibang to similarly-minded guitar-wielding revolutionary Jimi Hendrix—a man with nothing more than his guitar, his socially conscious beliefs, and his model girlfriend carving a path of his own that hasn't been even remotely replicated... until now! Gutxi Bibang lists his greatest sources of influence as "Bowie, Lou Reed, Björk, The Doors, and Roy Ayers" and further details that he's recorded a EP in LA that he and Oskar Recordings are planning to sporadically release as stand-alone singles. "And I already have a full album ready to be recorded sometime in the future," Bibang continued. Gutxi Bibang, Tabatha Beu & Garry Lee recently emerged from the studio to play a few dates ahead of year's end: Thursday, November 24th at London's The Finsbury, Tuesday, November 29th at London's Nambucca, and last night's December 6th show at New York's own Communion Showcase at Rockwood Music Hall. Earlier this morning, Jonathan & Pete from Oskar Recordings sent over Gutxi, Tabitha & Gary's fittingly sparse, grainy anti-establishment Laura Martinova-directed "System of a Gun" music video, which was seemingly filmed one afternoon in their apartment. "We believe in the spirit of the 'peace and love revolution...'"