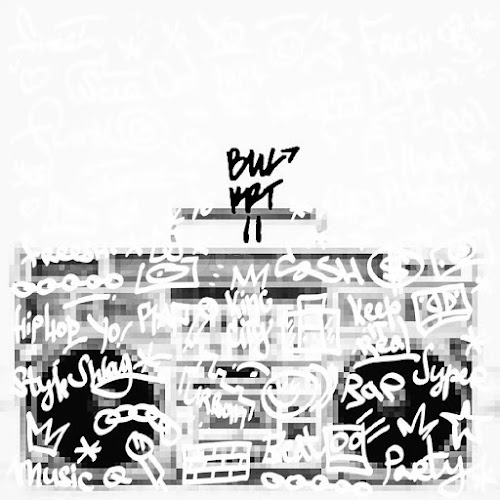 "I'm a lover of the Avant-Garde, Abstract, and Electronic [music.] My work is about the subjective nature of human experience through art, it's effects on the human psyche, and the efforts to create elegant, yet basic shapes, usually utilizing a post-Internet methodology. I like cutting up things and re-purposing them. I love to collaborate, especially via The Internet. I am a product of remix culture. I love to use samples, clip art, and font. I adore collage. Currently, I am actively pursuing an adventure in fashion design," Fort Worth, Texas-based Instrumental Hip-Hop producer BLKrKRT (Phil Ford) wrote within his about.me profile. I actually met BLKrKRT through my frequent collaborator and friend Darko The Super, who released Ford's The Witzard-premiered Okinato Black on his U DONT DESERVE THIS BEAUTIFUL ART imprint. Darko actually flipped Okinato Black's "3,000 Words" into "God, F**k America" from his recent Rock sample-based album, Apocalyptic Bastard, as well as another beat from the album for "A Very Darko Christmas." Since releasing Okinato Black in December 2016 and announcing his impending retirement from music to peruse a career in fashion design, Phil Ford has released an album's-worth of "microwave beats," Precious Metals, Heavy Gems II and an album of contagious rhythms and impassioned melodies called i n d i g o_2 . 0. Now, enter: BLKrKRT LP II, the proper follow-up to his 2016 BLKrKRT LP, which will likely be Phil Ford's final self-released album before retiring and his fourth album since Okinato Black (just four months ago!)


Phil Ford described his BLKrKRT LP II, via email, as "a love letter to Boom-Bap. My inspirations were cocooning, YouTube e-digging, musical grit and noise, harmonics, analog warmth and thick EQ's of late 90's Hip-Hop, the duality of life that human inexplicably create, and the unresolved feelings we have when something has ended. This album is a celebration of my musical pursuits up until this point and feels like a good stopping point." BLKrKRT LP II is quite fittingly tagged on Ford's Scenster Bandcamp page as: .wav, abstract, beat culture, boom-bap, electronica, experimental, fort worth, instrumental hip-hop, post-dilla, poor stylus, sample-based, Texas. "The original BLKrKRT LP (2016) was presented as a day-in-the-life... whereas part II follows more of an internal narrative about self-belief, doubt, the acceptance of limitation, and the liberation from old pursuits in favor of new ones. The elements of the album are mostly improvised... stripped down sample-based works, exploring riffs and basslines. Rather than the more subdued, gritty and crunchy lo-fi sound, here the more finely EQ'ed, wide, spatial mix technique was more fitting, reminiscent of a late 90's vinyl-listening experience... including dirt, slight over-loading, warm receiver response, and bad stylus blip in tow," BLKrKRT fondly detailed. Although it's labelled as Post-Dilla Instrumental Hip-Hop, BLKrKRT LP II is very evocative of J Dilla's magnum opus Donuts, Electronic-based Ruff Draft EP, rapper-producer album Champion Sound with Madlib (as Jaylib,) and even his late 90's-early 2000's work with the Soulquarians collective. BLKrKRT LP II is currently available on Phil Ford's Scenster Bandcamp page, which just reached the 10,000 digital downloads benchmark, along with roughly 43 past self-released albums, mixtapes, beat tapes, and EP's spanning his 6-year career.