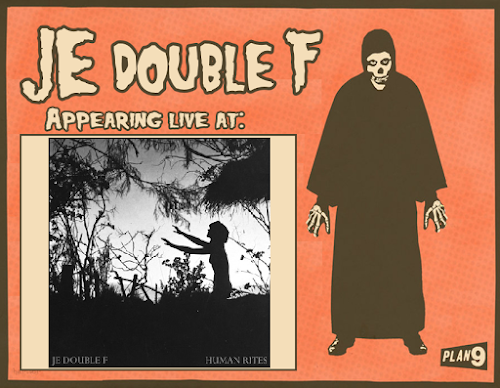 "Fast, chaotic songs with no frills. Heavy touring schedule and DIY ethics; if Danzig met DOOM, you'd have JE DOUBLE F," reads a fragmented chunk of a recent press release I received from Atlantic City, NJ-based Punk rapper JE DOUBLE F. Jeff Richie has previously worked with Pittsburgh emcee Cody Jones (formerly Stillborn Identity), fronts a Nihilist New Wave/Punk band called TUFF TURF, and was recently cited by Static Brothers' Riff Quantum & DJ DM as a primary source of influence on their latest OBSTETRIC TRASH EP. Richie readily cites his own greatest sources of influence as Glenn Danzig, Bruce Campbell, Larry David, and Bruce Springsteen. "'JAGGED EDGE" is mainly influenced by the current political and social climate in the United States. People make a choice and then complain about the result, as if someone made that decision for them. "Personal responsibility" is considered a bad term and young people seem to love the government, expecting it to protect them from everything. People also seem to be fabricating oppression, while silencing anyone with an opposing opinion. My jagged edge is my mind—I don't think like others and I don't believe a f**king word anyone says. If someone asks me a pointed question, expect an answer that you may not like. [Henry Rollins once said,] "knowledge without the mileage equals bullsh*t," JE DOUBLE F further detailed within a recent email concerning his sources of influence and inspiration on upcoming American Scream Records album, HUMAN RITES.


HUMAN RITES, "15 new Nihilist Punk anthems," is currently available for pre-order from JE DOUBLE F's own American Scream Records; for the extremely reasonable one-time fee of $16.66, eager listeners will relieve a 6-panel digipak CD, "JAGGED EDGE" raven T-shirt, assorted stickers, and album digital download from American Scream's newly-updated Bandcamp page. Jeff Richie recounts that "Glenn Danzig is an incredible singer and song-writer who never made music that sounded like others. His music always has heart and balls, no Bubblegum garbage. DOOM for the same reasons—he always made interesting beats that sounded like no one else's. I honestly don't listen to a ton of Rap anymore. DOOM is one of the only rappers I listen to anymore." While JE DOUBLE F currently calls Atlantic City home, he was actually, oddly enough, born and raised in my hometown of Bridgeton/Vineland, NJ. He's amongst a select few talented emcees from Cumberland County I can recall encountering over the years: Awkward Silence/Zombie Gang, Sapwood spitter Jason Brownies, Cheezy & The Crackers, and ever-illusive Mr. Moot. I can personally attest that I've heard a pre-release advanced copy of HUMAN RITES (ahead of its impending June release) and it truly is entirely unlike anything I've ever heard before; it really does sound like something along the lines of an unholy hybrid of The Misfits or Samhain-era Glenn Danzig juxtaposed against DOOM's uncanny and ever-inventive flow from Madlib-produced MADVILLAINY. HUMAN RITES pre-orders 1-50/50 are expected to ship out on or around May 1st, ahead of JE DOUBLE F's currently unspecified June 2017 American Scream Records release.
Posted by Matt Horowitz at 9:54 PM