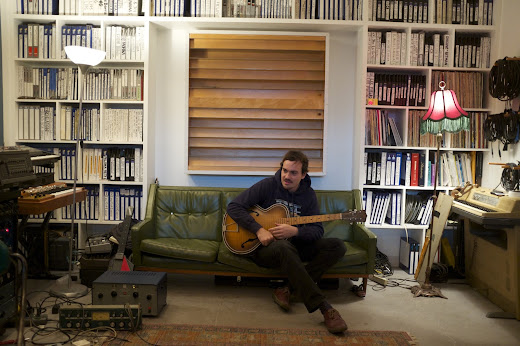 This time, in addition to re-interpreting the Wu compositions for a live band, EMA pays homage to the production and sonic fog that makes a RZA beat so recognizable. Producer and bandleader Leon Michels recorded the album completely analog, sometimes hitting six generations of tape before it was ready for mixing, giving the Return to The 37th Chamber it’s own hazy sound. Adding to the unique fidelity, the record is laced with Psychedelic flourishes, "John Carpenter" synths, Heavy Metal guitars, triumphant horns, and traditional Chinese instruments that make up for the lack of the Wu's superlative vocals. From start to finish it’s a dark trip that walks the line between RZA's timeless Hip-Hop aesthetic and the cinematic soul EMA has become known for...

From the music to the presentation, this album is a perfect example of what can only be achieved through diversity. The end result is as much a kaleidoscope of influences and multi-culturalism as the city it was recorded in. El Michels Affair is once again, "sounding out the city" that raised them, pulling elements of art and culture from across the country and around the globe to create an album truly unique, in it’s own right."

I. Who are the current band members and players associated with El Michels Affair... or has the group effectively turned into a one-man band since Enter: The 37th Chamber?

I do most of the production and over-dubbing myself, but Nick Movshon, Homer Steinweiss, and Thomas Brenneck make up a lot of the rhythm section and have a lot to do with the sound. I share a studio with all three of them and we all work on each others' projects, whether it's Menahan Street Band, Lee Fields, Charles Bradley, or outside production stuff that we get hired for. [There] are also musicians I bring in here and there to flesh out the arrangements.

I took inspiration more from production side of the [Wu-Tang] songs; rather [than] just trying to re-create the compositions in a different way.

Originally, the idea was to have a cover like the Jamaican records from the 1970's and 80's that look like fake Kung Fu/B-movies. Like Lee Perry’s Kung Fu Meets Dragon and Super Ape. I looked for the guys who did those covers, but a lot of them are either dead or I couldn't find. Danny Akalepse is friends with gallery owner of Chicago's Deadly Prey Gallery, which works closely with the Ghanaian artists that paint movie posters for the local cinemas in Accra. We sent them basic ideas for what [our] "movie" was about and crude drawings of the different characters. They interpreted it in their own way, which ended up looking way cooler than I had ever imagined. They are painted on two sewn-together flour sacks. The original pieces are 4ft. x 4ft. and look even better in person.


IV. How did you go about choosing Lee Fields and The Shacks songstress Shannon Wise from your Big Crown Records label roster? How did you then, go about placing them on the appropriate corresponding tracks within Return to The 37th Chamber's sonic narrative?

The "Snakes" song has a Joe Tex sample, which was a no-brainer for Lee and whether it was for the Wu-Tang record or not, I would’ve done a cover of "After Laughter (Comes Tears)" ["Tearz"] with Shannon 'cause I knew her voice would work well for that melody and the sentiment it has.


V. Who did the animation behind your recent Return to The 37th Chamber TRAILERS? It vaguely reminds me of the artwork and visuals accompanying Dan Auerbach's The Arcs, a project in which you were heavily involved?

It's the same artist, El Oms. He's an artist/animator out of Bakersfield, CA that I met through Dan when we were working on The Arcs record. He has one of the most unique animation styles I've seen a long time. I'm a huge fan of everything he does!


VI. What do you have planned next for Big Crown Records this year? Have any releases lined up from your fellow label mates and signees? I would love to hear a Cruel Summer (G.O.O.D. Music) style label comp. one day!

[The] Shacks record, which I co-produced with Max Shrager is coming out this year, as well as 79.5, which I produced. We have a gang of dope re-issues of records we love; one, in particular, is a comp. from Sunny & The Sunliners, one of my favorite oldies groups ever. Very excited about all those records! And yeah, we will be putting out a comp. called Crown Jewels, which will feature some of the singles and unreleased songs from all [of our] artists.

Posted by Matt Horowitz at 6:57 AM