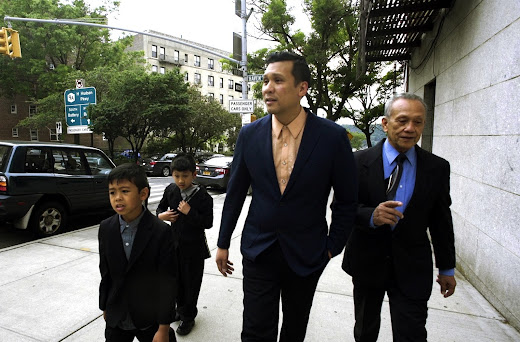 "Here's another excerpt from the Sulu & Excelsior visual album and what will probably be the next official music video we'll be releasing (we still have to shoot a set-up.) Enjoy this clip of "Misery Luv," which I directed and shot along with @jbsankara - This vid took some serious digging in the Super 8 crates of my pops, who is also featured in this video, as well as a slew of family," @suluandexcelsior wrote on his Instagram back on MARCH 31. I'll never forget, when I first met Sulu & Excelsior frontman Steve "Sulu" Mallorca back in Nov. 2016, he described his rather unique Hiphopfunkpunkmamboska blend of music as "Johnny Mathis meets Mos Def meets Stevie Wonder meets Nat King Cole" and it's stuck with me ever since! Sulu & Excelsior's instantly catchy, foot-stompin' debut Eddie Romero was entirely "Produced, Arranged, Composed & Performed by Steven E. Mallorca."

Thanks to an introduction by Jamison Harvey AKA DJ Prestige at Flea Market Funk, I've been along for nearly the entire Eddie Romero "visual album" roll-up, so far; I featured lead video-single "Up to You" here on The Witzard, interviewed Sulu himself and premiered "Dam Foo's," and ranked Eddie Romero at #7 on The Witzard's Best of 2016 Countdown. Now, I'm ecstatic to be able to showcase Chapter III in Sulu & Excelsior's Eddie Romero "visual album," GhettoBlaster-premiered "Misery Luv." Steve Mallorca and I exchanged a number of texts, emails, and phone calls and collectively decided to take a bit of a new approach on his latest "Misery Luv" short film and attempt to really delve deep and get into the nitty gritty behind his creative concept and over-arching family/visual album narrative; without further ado, please feel free to jump head first into our comprehensive "Misery Luv" interview below, pick up a digital copy of Eddie Romero, and keep an eye out for Sulu & Excelsior's upcoming John Wong-designed Eddie Romero vinyl LP re-issue.

I. How does the Super 8 footage, assorted film stills, and additional mixed-media used throughout "Misery Luv" and its like-minded predecessors "Dam Foo's" and "Up to You" correlate to Eddie Romero's forthcoming John Wong-designed vinyl re-issue packaging, as well as full-length "visual album?"

First and foremost, the album cover of Eddie Romero (both digital and the forthcoming LP) is an actual photo of my dad and his friend back in the day, listening to a record. That image already speaks volumes about the visual and audio style of album. We're in the design phase of the LP right now and the liner notes and sleeves continue in this same direction, so we always had this kind of visual in mind. But ultimately, this album was born out of a visual medium—I wrote the songs for a feature film that I was planning to produce and some of the songs even had specific places in the film already assigned to them (the first single, "UP TO YOU" would be the opening credits sequence and "MISERY LUV" would actually end the film.) Not saying that this feature film won't happen, but once these songs became their own stand-alone music project, they started to develop their own visual identity apart from my screenplay.

That said, Eddie Romero the album, has a Sci-Fi time travel element—it blends different eras of music and vocal styles, as well as references to films and film-making from different decades. I wanted to translate that audio theme into a visual theme and that's what you've seen in the first phase of the visual album. "Up to You" into "Dam Foo's" into "Misery Luv" all play with variations of "old movies;" with these first three videos, the old footage evolves from a fun vintage television performance in "Up to You," to a nod to pulpy late night television movies in "Dam Foo's," and finally, to "Misery Luv," where it flips everything and becomes a really very personal music video with actual footage from my family in the Philippines and 1970's Chicago inter-cut with my family now in NYC. And the current footage is the first time we step away from the old school 3:4 aspect ratio and see shots in the current standard 16x9 aspect ratio. So, it kind of wraps these first three songs as their own chapter of the visual album.


II. Now, I know they're not really a part of "Misery Luv'"s over-arching narrative... but would you care to speak a little bit on the Sulu & Excelsior full-band in-studio performance footage flashes from around 1:15-3:02, and interspersed throughout?

Obviously, this video is about family and the band shots are really a part of the NYC family representation. While I played everything on the album, these guys are what make the live show possible and they add a whole other element to the show. In addition, most of the guys in [Sulu &] Excelsior are my brethren from my OG mothership band, P.I.C. and P.I.C. is truly family.


III. Steve, who exactly is the older woman dancing within the archival footage between about 2:02-2:30 of "Misery Luv?" It's really such a fun-loving, charismatic scene!

It's basically the Philippines section where we introduce the Super 8 footage from my first trip to the Philippines as an infant. It features a montage of shots from different locations in the Philippines from Manila to my mother's hometown of Agoo La Union, to shots of the mountain city of Baguio. I love that shot of the dancing woman—it's actually a shot of my lola (grandmother) with her sisters and cousins. The one actually dancing isn't my actual grandmother, but her sister. Actually, in the quick cut preceding the dancing shot, you can see Baby Sulu with all the lolas!


IV. How about section 3:40 to roughly 4:00, what's happening here, Steve? It appears as though we're seeing three generations of sharply-dressed Mallorca men interacting and thoroughly enjoying themselves!

It's exactly that! This is the section of the video where everything ties together and brings it to the next generation. First, you see me in the hallway, then my pops joins in, then my two sons join us and we're out the door. I wanted it to be like the kinda typical Hip-Hop "walking with my crew" shot, but with my crew being my dad and sons. The other element here is where the boys take turns filming with the Super 8 camera and they're filming either me rapping or one of them rapping. This inter-cuts with footage of Young Sulu gripping that same microphone back in the day. So, timelines all start blurring, at this point and to make it even more blurry... my older son who is rapping in the shot, looks exactly like me, when I was a kid. We had a blast filming this section and the boys pulled out some moves!


V. Now, would you care to speak a bit on the props used throughout "Misery Luv," Steve? I believe you previously mentioned the stereo, head phones, Super 8 camera, mic, etc. had all belonged to your dad and appear within both the old archival and newly-filmed footage, correct? Sweet idea!

Luckily, my dad is a pack rat and ultra-practical—he doesn't discard technology, if it works. And being an engineer, mostly everything still works! So, the Fisher 125 you see him listening to in the current footage is the same exact stereo you see in the old Super 8 footage. The headphones that my dad and I wear throughout the video, are the same exact pair of headphones that my dad listened to back in the 70's. And to get ultra-layered with it, the Super 8 film camera that you see my sons filming with is the exact camera that my dad and mom used to shoot all the old Super 8 footage. The microphone you see attached to that Super 8 camera is the exact microphone that you see my baby self speaking into back in the day. Obviously, I was extremely lucky that my dad kept all this stuff in good condition—beyond enhancing the theme of the video, they were just so cool looking and added a lot of production value! 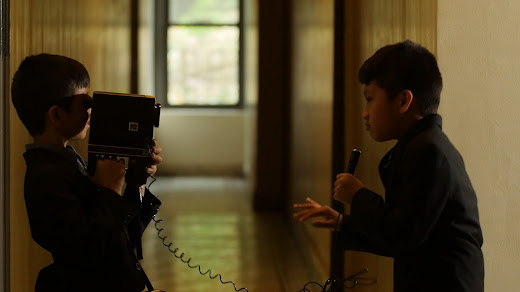 Posted by Matt Horowitz at 6:07 AM