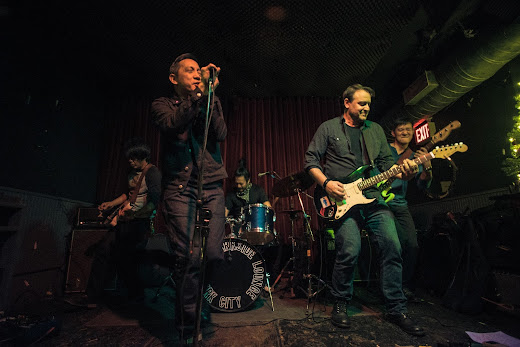 DRUNKEN MAN SIDE: A1 Blacksonny - "Tourniquet:"

I had accidentally set my record player on either 33 1/3 or 78RPM speed, as opposed to standard 45RPM speed (which is a fun little trick, if you haven't tried it before) and Blacksonny's split 7-inch lead-off track "Tourniquet" sounded a bit creepy, at first before properly adjusting the setting. "Jesus was a barrister; Jesus was all clad in furs," Blacksonny frontman Micah Valdes eerily exclaims about 30-seconds into "Tourniquet." It seems to be about either infidelity, addiction, etc. in a relationship and vaguely sounds a bit like The Mars Volta/At The Drive-In and has an early 2000's Punk/Brit Rock type feel.

Red Datsun bassist Mas Yamagata tells me he drove Blacksonny's guitarist John Ariz to Lakehouse Recording Studios one day to track some additional guitar parts and who did they bump into, but none other than Bouncing Souls guitarist Pete Steinkopf; Mas wasn't exactly sure how, but simply says John and Pete are "old music buddies" and Steinkopf would work a day or two a week, between his own projects, recording with Blacksonny & Red Datsun's buddy Eric Bennett. "Tourniquet" and Red Datsun's "Container Store" and "Korean Tacos" were all recorded and mixed by Eric Bennett, Dylan McLean, and Pete Steinkopf at Lakehouse Recording Studios in Asbury Park, NJ. Brief story about the cover artwork from Red Datsun's Mas: "The photo was taken by Micah (Blacksonny) when he was in Japan visiting family. Apparently, the man on the street was super-drunk and was picking a fight with a police officer, before he passed out. The bike is believed to be his. He's lucky cops in Japan don't carry guns." 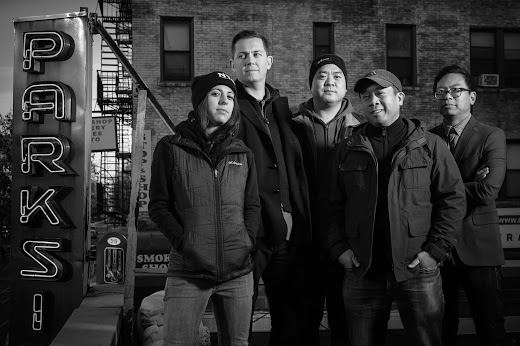 I was expecting Hiphopfunkpunkmamboska stylings because of (DJ) Mas' past work with P.I.C. and Sulu & Excelsior, but I must admit, I was pleasantly surprised with Red Datsun's "Bike Side." It's the perfect blend of American Punk/Indie Rock and is perfectly suited for 7-inch vinyl format. "Container Store" is fuzzed out, fast, jittery, intentionally "sloppy," and very Punk Rock. I'm reminded of Henry Rollins-era Black Flag (is there really any other era?) The Misfits, Iggy & The Stooges, The Sex Pistols, and Dischord Records. Red Datsun expertly employ that age-old Hardcore effect wherein the music itself sounds like it's falling apart at the seams, as well as chug-a-lug bass. Arctic Monkeys-esque spiraling/wailing guitar riffs are heard within "Container Store"'s outro, before it abruptly stops. Although, before you know it, the needle goes right into Track #B2.

Little less fast-paced and frantic right from the intro, when compared against B1 "Container Store." It's very guitar-heavy with a crunchy guitar/bass/drums combo, slight Electronic noise, and a bit of twang is sensed in frontman David Miller's shouted vocals. "Korean Tacos" embodies more of a modern Hard Rock-type feel reminiscent of Queens of The Stone Age, Foo Fighters, The Black Keys, and Arctic Monkeys. Miller's "let's go commit a crime, as the midnight washes past us..." refrain is a bit reminiscent of either Iggy Pop or Stones frontman Mick Jagger. Bassist and Persistence of Sound founder Mas Yamagata tells me both sides of Blacksonny/Red Datsun's split 7-inch were ripped directly to audio MP3's and digitized into what you're now hearing on Bandcamp, which is why you can almost hear the vinyl arm click "OFF" at the end of Side B. Now, my only complaint would be that Blacksonny/Red Datsun's split 7-inch is extremely TOO SHORT and leaves me wanting more from both groups (but I guess that really isn't a bad "complaint!") 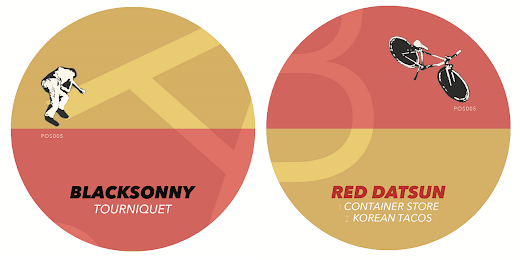 Leandro Gonzalez at Kenilworth, NJ-based Stereodisk pressed up a limited-run of 60 white label "show records" just in time for a December 2016 Red Datsun & Blacksonny gig, which we'll just call a "soft release" of their split 7-inch. Now, today, on this glorious Monday morning, I'm proud to present to you... the landmark second pressing of Blacksonny/Red Datsun's split 7-inch now available for purchase on Red Datsun's Bandcamp. There are a total of 500 records pressed at Stereodisk with what Mas Yamagata describes as "tons of variants; small hole, big hole, red vinyl, black vinyl, white label, official label, black and red vinyl swirls." Mas and his fellow Red Datsun/Blacksonny bandmates have recently been sending their split 7-inch around to members of the press, like myself, and now, you, the consumer, are also able to bask in the stereophonic glory that is "Tourniquet," "Container Store," and "Korean Tacos" for an extremely reasonable $5 price tag.