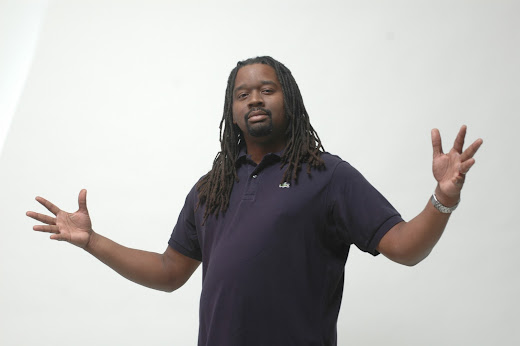 While he still might be a relatively unknown "underground emcee," Roughneck Jihad—formerly known as Jihad The Roughneck MC—has been spittin' fresh rhymes since high school, 1988; over the years, he's formed countless Hip-Hop crews including Un Cut Poets, Third Sight with DJ Du Funk, Smooth Tone, and D-Styles, The Incredible Torture Show (T.I.T.S.) with Trailer Trasher & Maestro Gamin, The Language Mechanics with Insomniac & Raggedy Andy, The Tarantula Brothers with DJ Du Funk, Disco Sinisto with Turin, Italy-based producer IL Torsolo, newly-formed Echoes of Oratory Music, The Darc Bros. and currently runs label imprint Disgruntled Sounds. There's also a vinyl and cassette re-release of Third Sight's 2016 Orchids & Corpses compilation album originally recorded to 4-track between 1993-96 scheduled for this upcoming September. Aside from his just-released second solo album, The Wretched of The Verse (A Microphone Murderer's Extended-play Response to Unabridged Wackness In Hip-Hop Music Today) Roughneck Jihad is currently working on anywhere from 8-10 additional projects with a wide array of beat-minded collaborators including, but not limited to those listed above.

Prior to its August 3rd release, I've heard at least two versions of Roughneck Jihad's The Wretched of The Verse through various stages of completion and I can assure you, it's one Hell of a single-emcee Hip-Hop album! Jihad collected hard-as-nails beats from the likes of Abomination, Pryvet Peep Sho, Waxsmith, Frank John James, and BOOKS1. I would say The Wretched is stylistically reminiscent of Sean Price's Mic Tyson, Madlib & DOOM's MADVILLAINY, Wu-Tang Clan, and DOOM's Danger Mouse-produced [adult swim]-themed THE MOUSE AND THE MASK. I've been speaking with Juan (Roughneck Jihad) over the course of the past few months through The Wretched of The Verse's various stages of completion and as a quasi-follow-up to our previous The Wretched Sampler breakdown, he was kind enough to sit down with The Witzard for a comprehensive 10-question interview, which you can now peruse through below, while streaming Roughneck's new album. The Wretched of The Verse is currently available to purchase in a number of limited edition formats: 300 gold vinyl LP's available on German-based EXPANDED ART RECORDS, 100 cassette tapes, and of course, unlimited $12 digital albums all available from Jihad The Roughneck MC's Bandcamp page.

I. What was your intended message behind sub-titling The Wretched of The Verse: "A Microphone Murderer's Extended-play Response to Unabridged Wackness In Hip-Hop Music Today?" Who exactly, if anyone, is that particular statement aimed towards?

The sub-titling was a creation of the cover artist Raggedy Andy and he was simply riffing off of the book cover of The Wretched of The Earth by [Frantz] Fanon. He needed to change the words a bit to make it fit the mood and direction of the LP. We have been working together since before E. Pluribus and he knows I hate wack emcees, so it all worked out. He didn't have any particular emcee in mind, as far as I know. The industry is full of wackness in Mainstream Rap, but it's always been that way for generations.

II. The Wretched of The Verse has an underlying Hanna-Barbera cartoon-type feel and vaguely reminds me of Sean Price's Mic Tyson, MADVILLAIN's MADVILLAINY, DANGERDOOM's THE MOUSE AND THE MASK, etc. How intentional (or unintentional) was this running "Saturday morning cartoon"-evoking feel?


The cartoon sample has long been an element in the producer's repertoire. DOOM and Ghostface [Killah] went hard on the cartoon samples. Men of our age grew up on cartoons, so those samples bring back those days of our youth. Only real heads can pick out the source material they come from. It takes some digging. [Pryvet] Peep Sho is younger than the rest of us, but he's a true comic book cartoon nerd, which is evident on the tracks "Phantom," "Toys," and "Blowhard." He tries to keep the listener guessing what he used and how he flipped it. Nobody has figured it out yet. The other producers did not use cartoons.

III. Who exactly hand-crafted and produced the various beats showcased throughout The Wretched of The Verse and how did you initially go about contacting and attaining beats from said producers?

There are five producers on The Wretched: Pryvet Peep Sho, Waxsmith, and BOOKS1, who also did tracks on Third Sight IV. The two new-comers are Frank John James and Abom 1. I met Peep Sho years ago through The Ruckazoid and we have been recording since 2012. He gave me a beat CD back then and we just connected. We had done a few different songs along the way; he did "Jeepers" on Chillin' and "Nerd" and "Cuckold Crush" on IV. We have many unreleased songs other than the five on this LP. Waxsmith used to DJ for a good friend of mine, Nate Mezmer. He sent me some beats, which I really liked and we have been working together [ever] since. BOOKS1, I linked up with through my mix engineer, Jerry D. He is a protege of DJ Hen Boogie from The Derelicts. We have a few mutual friends. I met Frank John James through Clockwize. He's part of the Echoes of Oratory [Muzik] crew that took me in. He gave me a super-soulful beat CD at a show. He has hundreds of beats, I just picked a few and ran with it. Finally, I met Abomination through my homeboy and rhyme partner, Maestro Gamin and he was kind enough to slide me some tracks. I met them all through my network.

IV. In addition to The Wretched of The Verse, what else are you currently working on that may see an eventual release within the coming months; any projects of particular note?

The main projects arriving this year after The Wretched are Orchids & Corpses and The Tarantula Brothers. Orchids is already available for digital download on my Bandcamp, but we did a deal a couple years back with Omar at Sanctimonious Records for a physical release. So, we're dropping the songs on an EP, 7-inch, and cassette tapes pretty soon. Tarantula Brothers, my LP with DJ Du Funk is being mixed now, but might not be out until January.


V. What exactly is the tentative release schedule for The Wretched of The Verse in its various formats? I know you had previously mentioned it will be available on vinyl, cassette, and digital album formats.

The digital download is out now. The vinyl and tapes will be out at the end of August.

VI. Now, did you make an intentional decision to keep The Wretched of The Verse a one emcee and a microphone-style album with absolutely NO features? Let's just say you had and unlimited budget and unlimited means... who would you ideally, get for features, producers, etc. on The Wretched?

Sometimes, a producer just wants you on a track. Unless they tell me otherwise, I don't feel at liberty to add guests. It just kinda turned out that way with these tracks. I have a bucket list of people I'd like to work with in the future. If I could pay them, I'd do it now: DJ Premier, DOOM, Breezly Brewin, Scaramanga, Rakim, Wu-Tang Clan, Saafir, Gift of Gab, Myka 9, Jehst, Sylabil Spill, [André] 3000, [Pharoahe] Monch—a huge list, really.


VII. Do you have any current plans to release any additional singles, music videos, 7-inch singles, etc. during The Wretched's initial album roll-out phase?

We are definitely going to do some videos for The Wretched real soon. I'm working on that now.

VIII. What would you say were some of your greatest sources of inspiration and influence while writing and recording The Wretched of The Verse?

The Wretched songs were not conceived as a single project and they were recorded over a period of years. The beats are what inspires me the most. I go off of the producers' creativity and see where that takes me, for the most part.


IX. What's the current status of Third Sight, Tarantula Brothers, The Incredible Torture Show (T.I.T.S.) Foul Mouth Cringe, and any of your additional pre-existing groups? Can we expect to see releases from any of them any time relatively soon?

The only projects that are sure to drop soon are Orchids [& Corpses], Tarantula [Brothers], and Disco Sinistro [EP with IL Torsolo]. I hope all of them see the light of day, but collaborative efforts need to fire on all cylinders to get finished. Disco Sinistro and Juan Sequitur will be coming in 2018. The Torture Show (T.I.T.S.) is dead in the water and there will be no more music from that group.

X. What is your opinion on the current state of Hip-Hop and "Mumble Rap?'" Who are your Top 10 Favorite Rappers today?

I think that the term "Mumble Rap" is a little harsh. I know some of these new emcees mumble through freestyles but that's not why some of their songs seem so unintelligible. Auto-Tune is the main culprit that makes them hard to understand. They have their own jargon and they are essentially, rebelling against more complex forms of rhyming. They have taken to extreme minimalism and unlike emcees before them, they do not have any positive progressive messages or humor to their songs. Major and mid-major labels that sign these acts are not investing much money into the current acts and as a result, they cannot sample or hire bands. Their music is often badly played on keyboards to save money. Terrestrial and digital radio are not acting as gate-keepers or quality controllers. Whatever sells gets the spotlight and the underground is truly "underground" now, more than ever. They have taken party music to the extreme and they have unprecedented access to the infrastructure. Fans of real Hip-Hop have to dig, not only at stores, but online, in order to find the music they like the best.

This is the price of this new form of Rap being mainstreamed. I like to call it "Fast Food Rap" because you consume it and it passes through you faster than a Taco Bell taco and then, you wipe your a$$ and move on. It seems each generation is growing up on increasingly simplistic, destructive anti-social styles of Rap. When I started all those years ago, I had superior role models to emulate, but the youth have grown up on lesser emcees. Some of them, too young to even remember Biggie Smalls and it has been downhill since his passing. There are some stand-out younger emcees out there like Kendrick Lamar, J. Cole and A.F.R.O. but they are the outliers in a sea of people who shun lyricism and embrace singing Auto-Tune and über-simplicity. My Top 10 emcees right now is tough; I like a lot of emcees back in their primes, but I haven't liked their more recent releases: 1. MF DOOM, 2. Ghostface [Killah], 3. Rakim, 4. Big Daddy Kane, 5. Kool G. Rap, 6. Kool Keith, 7. KRS-One, 8. Del [The Funky Homosapien], 9. Nas, and 10. [Pharoahe] Monch.

Posted by Matt Horowitz at 8:44 AM