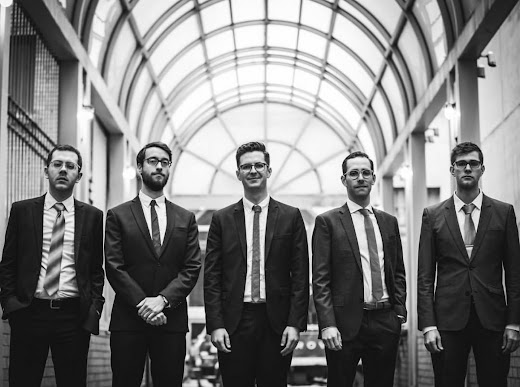 Cowboys & Frenchmen (C&F) are a wonderfully named, New York-based Modern Jazz quintet that describes itself as an act who "produces music that is expressive and fiercely creative, taking co-improvisation to new heights," as their Facebook About section fitting describes. I'll be the first to readily admit, I'm not the most well-versed on Jazz's formative late greats, but I've always enjoyed a Jazz-minded Hip-Hop sample and the Neo-Jazz stylings of Flying Lotus and his BRAINFEEDER crew, BADBADNOTGOOD AKA BBNG, Wu-Tang Clan-indebted El Michels Affair, Polish Jazz septet EABS, and even "The Greatest Band In Late Night," Philly's own The Roots. I received a cold-sent email last month from Massachusetts-based PR company Braithwaite & Katz Communications high-lighting the title track from Cowboys & Frenchmen's innovative, alto sax-led sophomore album, Bluer Than You Think—to be released today, Friday, October 13th, on Outside-In-Music on Amazon, Bandcamp, iTunes, Spotify, and like-minded digital retailers. Bluer Than You Think sounds something to the effect of Herbie Hancock & The Headhunters' 1973 Jazz-Fusion masterpiece Head Hunters, The Vincent Guaraldi Trio's cartoon-accompanying soundtracks and scores, and BBNG's unique brand of Canadian-rooted, Hip-Hop-indebted Neo-Jazz. About two weeks ago, I sent a batch of questions over to Cowboys & Frenchmen's co-band leaders, composers, and baritone/alto saxophonists Owen Broder & Ethan Helm, which can now be read in its complete, fully unedited glory down below the break, for all you Funk-tastic Jazzcats out there.


I. How long have you and your Cowboys & Frenchmen (C&F) bandmates been playing together and how did you fellas initially meet?

II. How would you personally say C&F's overall sound and style has progressed between Rodeo (2015) and Bluer Than You Think?

EH: Between Rodeo and Bluer Than You Think, I think our sound has stayed similar, but all of our new compositions have a much stronger identity; we get to [the] point. We also have more control, both as a band and as individual improvisers, over some of the crazier musical ideas we tackle.

Owen Broder: There is a similar personality to both albums and we maintain the character we presented in our debut album. The music, though, was written with more inspiration from within the band. Ethan and I borrowed compositional ideas from each other and—after playing with these guys for five years—had a much stronger sense of how to write for their voices, which gives the album a more cohesive sound.


III. What might you cite as a few of your greatest sources of inspiration and influence during the making-of Bluer Than You Think?

EH: For this album, I was greatly influenced by my fellow band members. I really try to write for their voices and showcase their many strengths. But our influences run the gamut, musically and extra-musically, from Ellington to the band Zs or from impressionist painting to daily life in New York City.


IV. What made you guys decide to link up with GRAMMY Award-winning producer Ryan Truesdell for Bluer Than You Think and how did he ultimately, influence the album's sound?

EH: Ryan has been a huge help to us all, even before C&F. He was a guest artist at our school [Eastman School of Music] in undergrad and has remained a wonderful friend and a huge advocate of us, as players and composers. In the studio, he kept us focused and had some really great ideas to loosen up the tunes and add interesting textures and was also an invaluable resource for picking the best takes. We know he doesn’t like to talk about that GRAMMY, but it’s obvious why he won it.

EH: Owen and I write separately, bringing in ideas for compositions or sometimes, full pieces. Since the written material is always pretty ambitious, it takes us a while to feel out the tune and make it flow naturally, sometimes, months or years! We’re hyper-organized in the studio, though, just to save money. We go in well-rehearsed and have a schedule for doing takes and overdubs. For production, our focus is mainly on clarity and acoustic balance, since the compositions are meant to be heard on recording, as they’re heard live (with some exceptions.)

OB: Ethan and I separately write each of the compositions, but almost all of them involve some level of work-shopping, which brings all five of us into shaping them. We try to grow into the music in performances, rather than in rehearsals and then, bring that energy into the recording studio.

VI. It's just about that time of year for publications and websites (The Witzard included) to start assembling year-end lists; now, with that said, what might you be inclined to include on your "Best of 2017" list?

OB: From this year’s releases: I’ve particularly enjoyed Matt Wilson’s latest, Honey & Salt—a wildly creative and fun musical presentation of the poetry of Carl Sandberg—and Kneebody’s Anti-Hero. Kneebody is a favorite for Cowboys & Frenchmen—we learn a lot from them, as a band and are big fans of their music, so we follow their recording career closely. A few great CD’s have come out from our Outside-In-Music label family, too; Paul Jones’ Clean features stellar writing, borne from his residency at the Banff Creative Arts Centre and inspirational playing from several of our friends and colleagues. The label’s founder, Nick Finzer, also released his [album] Hear and Now this year, which is a fantastic album featuring his sextet.

EH: I get so far behind with new releases! I’d be better qualified to write a "Best of 1959" list. Although, I do love Andrew Schiller’s album, Tied Together, Not to The Ground; a two-tenor band, so they’re like C&F version 2.0. For non-Jazz albums, I have to throw Alarm Will Sound’s Splitting Adams. It’s half-album, half-podcast with impeccable recordings of John Adams’ Chamber Symphonies and in-depth interviews about the pieces. A new album format and so well-done. 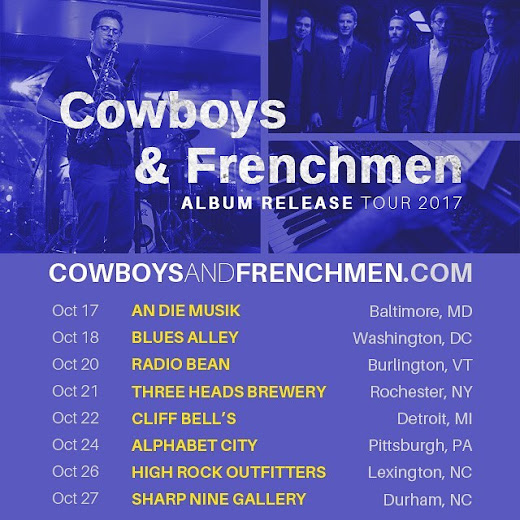 Posted by Matt Horowitz at 8:37 AM