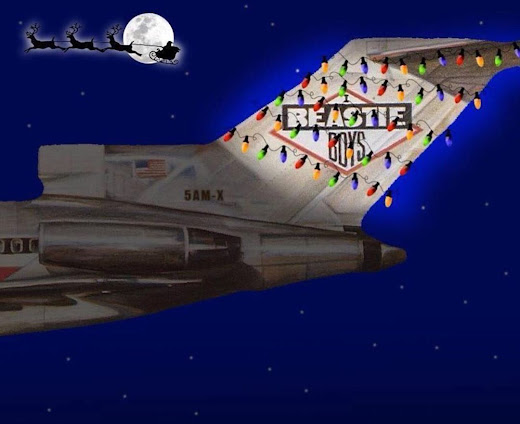 Happy New Year to all of our trusty readers! 2020 marks 10 consecutive years of The Witzard, which is a little hard to believe, even for me! It's been a great ride thus far and we greatly appreciate everyone that visits and supports our site on a regular basis! I'm hoping to do a full site re-design in 2020 (something I've wanted to do for a few years!) but my wife and I are expecting our first child this Summer... so, we'll just have to see what happens, honestly. Hope everyone had a happy and safe holidays season! Here's a selection of new singles that were released over the holidays; let's just call it a best of 2019 year-end/2020 kick-off singles feature. Truth be told, these are some of our favorite artists here at The Witzard and we're excited to see/hear what they have in store for 2020! Festive Beastie Boys artwork courtesy of Pollywog Crew (@pollywogcrew.)

Matt "The Witzard" Horowitz
It's A New Year, Wavy Baby!

"Worthy" was originally released as part of The Cloaks' 2019 album, amazingly-titled CLOAK ENCOUNTERS OF THE THIRD KIND. It primarily featured, of course, The Cloaks' core line-up of emcees AWOL One & GEL ROC and in-house producer Awkward, along with guest emcee Kool Keith. Days before year's end, The Cloaks returned with an Awkward-produced Remix of "Worthy," this time, with DJ D-Styles of BEAT JUNKIES, Invisibl Skratch Piklz, and Third Sight fame. It's without a doubt, one Hell of a remix that brings, the heat, ramps up the original "Worthy," and makes room for some world-class scratches and DJ wizardry from D-Styles. Stream The Cloaks' "Worthy" (Remix) now, via AVB/Alpha Pup Records.


Four Elements & Beyond AKA F.E.B. is a New York-based Renaissance Hip-Hop crew/collective consisting of emcee/producer Freak Tha Monsta, emcee/illustrator Miggs Son Daddy, and emcee/coach Werd Life. "F.E.B. is doing what they do straight through into The New Year. With new music incubating, be prepared for consistent heaters from the crew, starting with this light joint by Miggs & [Werd] Life over Alchemist drums," reads a new Bandcamp Description. "Not for Sale" was, seemingly, created atop a mysterious beat lifted from Evidence & The Alchemist's beloved Hip-Hop super-group, Step Brothers. F.E.B. warm fans to expect new music from the group, as well as individual members, throughout 2020. Four Elements & Beyond/F.E.B.'s latest full-length effort, Brush Strokes, a Jazz/Hip-Hop album is now available on streaming services, as well as CD and vinyl.


Carl Kavorkian, under his MANIKINETER alter-ego, has now returned with his first effort of 2020, a new single entitled "Sizzlean." Quietly unleashed at the stroke of midnight on New Year's Day, "Sizzlean" was released exclusively to Spotify & Apple Music. Following a string of loose non-album/EP singles, it appears as though we're inching closer and closer to Kavorkian's debut full-length as MANIKINETER. Carl Kavorkian recently told The Witzard, via email, that he "remixed a track for [Uncommon] Nasa, but ended up using a different beat. Didn't want the beat to go to waste, so I f**ked it up and added vocals and made a MANIKINETER track out of it." "Sizzlean" is now available to stream or download exclusively on Spotify & Apple Music.


Rolled Gold had quite the productive year last year: self-releasing four beat tape EP's and a couple stand-alone singles. Right before year's end, Rolled Gold's returned with one final effort for 2019, a single entitled "wavy in the whip." It features original beats, musical backing, embellishments, etc. created by Rolled Gold and his circle of close friends and collaborators, which was then, sampled and meticulously re-arranged by Harry Metz himself. "wavy in the whip" features vocal delivery/rhymes from Uncle Crimson, piano by Margel "The Sophant" Overton, upright bass by Ray Bailey, and cover art designed by Rolled Gold's own father, Richard Metz. Rolled Gold's "wavy in the whip" is currently available to purchase, stream, or download as a Bandcamp-only exclusive.

Posted by Matt Horowitz at 9:58 AM