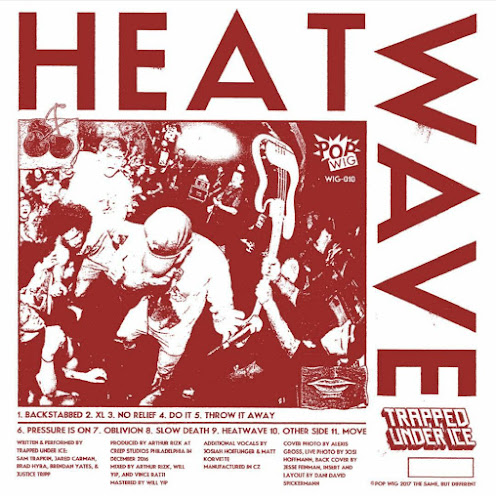 "10 years after their first release, Trapped Under Ice brings you Heatwave. This phat LP is short, fast, and Hardcore; the way Straight Ahead intended, but played more like Fury of Five and Breakdown at a backyard party. For Punks who've considered throwing a spin-kick in jean shorts. Rhythmically, Heatwave is like a trailer park Sepultura. Check it out if you f**k with what TUI has been doing for the last decade. The same, but different" is how Baltimore Hardcore Punks Trapped Under Ice describe their latest record, Heatwave within a Pop Wig Records pre-order. Heatwave consists of 11 rapid-fire tracks that collectively clock in at right around 14 minutes-worth of frantic, blistering well-executed Punk. It's been six years since Trapped Under Ice's last album, Big Kiss Goodnight (2011) and since then, its members have splintered off to form like-minded progressive Punk/Hardcore bands Angel Du$t, Turnstile, Diamond Youth, Down to Nothing, WARFARE, and Sai Nam, as well as number of additional side-projects. Now, don't get me wrong, Heatwave is without a doubt, a Hardcore album through and through, but it has undertones of an assortment of genres including Indie Rock, Metal, Hip-Hop, and even sampling culture peppered throughout.

"It's Hardcore, it's Punk, it's a variation of other things that are happening. But we wanted to present the idea of, 'do what you want, do it your way, put your own stamp on it.' Don't get me wrong—it's definitely a Trapped Under Ice thing. I think it's a hard-a$$ record. There's nothing wrong with loving ignorant music—put your own twist on it," Trapped Under Ice revealed to CLRVYNT within a recent piece fittingly titled 'ROBBING CARS FOR FUTURE PUNKS: TRAPPED UNDER ICE RETURN.' I've been in touch with Angel Du$t and Trapped Under Ice frontman Justice Tripp on-and-off over the course of the last year or so and after a couple failed attempts at doing an emailed interview, we finally linked up for a Heatwave-centric interview. Tripp tells me in addition to Heatwave, Trapped Under Ice are gearing up to unleash a few of the albums B-sides and leftovers, as part of a New Noise Magazine flexi-disc (now available for pre-order) and an inclusion on Triple-B Records' upcoming America's Hardcore, Vol. IV comp. due to be released this upcoming Fall.

I. Here's something I've always been curious about with Punk/Hardcore bands: how much material did Trapped Under Ice record during the sessions that ultimately birthed Heatwave or was that simply all you recorded... 14 blistering minutes?

We recorded three songs that didn't make the cut. One is coming out on a cool Triple-B Records compilation called America's Hardcore and another as a limited [edition] flexi-disc being released by New Noise Magazine. Those tracks are both sick, they just had a slightly different vibe than the record.


II. How did you guys go about recruiting Pissed Jeans frontman Matt Korvette to perform co-lead vocals on "Do It?" Who else is on your "wishlist" of potential collaborators?

We recorded with Arthur pretty soon after Pissed Jeans [finished WHY LOVE NOW]. Matt came in to see Arthur and we chopped it up about Hardcore favorites and stuff like that, before asking him to lend his talents for that quick moment of the record. We're fans of the band, so it was pretty convenient and cool.


III. What was it like working with Pissed Jeans WHY LOVE NOW? and Cold World producer Arthur Rizk? Did he have any particularly cool stories about recording with Sean Price, Meyhem Lauren, Kool G. Rap, Max B, etc?

Arthur has been a friend to all of us for a while, so it was very comfortable and organic. Arthur is full of cool stories, but he's also the type that doesn't make himself the center of attention too much, so you have to dig it out of him some. It was such a cool experience. I want to do it again, like right now!


IV. I have to ask... what's the deal with Heatwave's album cover? Where did you find or how did you come up with the concept behind its imagery? It's such a captivating image! I must say, I really dug your recent pre-album old school Punk-reminiscent show flyers, as well!

The only idea I had in mind was that it should be something that felt like a hot summer without being too direct or obvious. Also, it was important to us that it felt unlike anything else we've done before. I kept using that image (that my friend and photographer Alexis Gross took) as a reference for what I thought would look cool. Then, I realized that exact image accomplished just that; it feels hot and stressful, but fun. I hope that's how the record feels.


V. What would you say are some of the greatest similarities and differences between writing and recording an album with Angel Du$t vs. Trapped Under Ice?

With writing and recording Trapped Under Ice, you have stronger opinions and lots of different ideas going in different directions, but I've always thought that is one of the things that makes it special. We constantly challenge each other and create a cohesive way to include the broad spectrum of vision between us. Angel Du$t is a little more relaxed and open-ended. I think that has its benefits, too. No matter what I'm working on, recording is the most stressful and fulfilling thing. 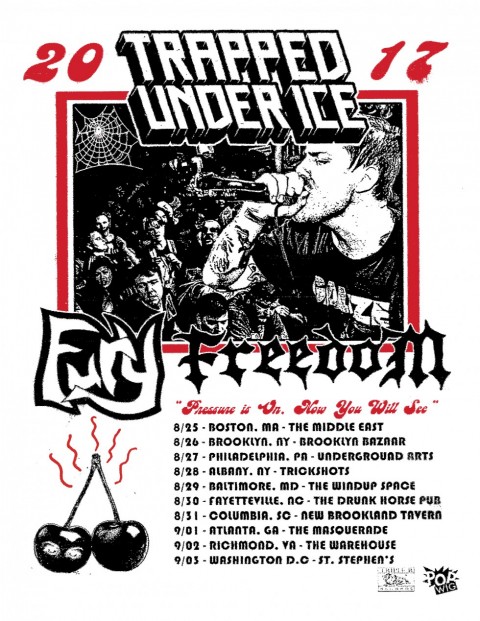 Posted by Matt Horowitz at 9:40 AM