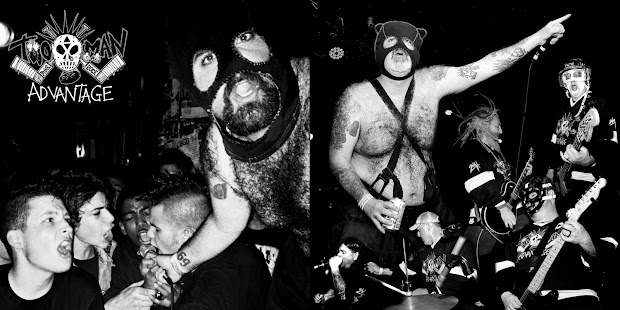 Various members of the team/band at Two Man Advantage (2MA) partook in our initial run of Guts of The Ice Hockey Punk-centric features a few years back. We've kept in touch with Spag/Drunk B*stard and a couple other 2 Man goons in the years since intially "meeting" online. 2 Man started a Bandcamp page around 2018 uploading their career-spanning back catalog, as well as rarities, new musical releases, etc. Last week, The 2 Man announced they would be releasing a new live album entitled DCxPC Live Presents: Two Man Advantage. It's all done in homage to V.M.L. Records' iconic V.M.L. Live Series, which originally featured The meatmen, The Queers, Agent Orange, Anti-Flag, AVAIL, The Hanson Brothers/Nomeansno, and more. Side A was recorded at CBGB's in 2002 when 2MA opened up for Poison Idea and Side B was recorded at Punk Rock Bowling in 2018 when they opened for Subhumans. It's a fairly unique live record in that it boasts have excerpts from two shows that were 16 years apart. Plus, everyone who has ever been a memebr of Two Man Advantage appears on at least one of the Sides with no overlap of songs throughout. We got a change to speak with Aaron "Coach" Pagdon, via email about the logistics behind putting together DCxPC Live Presents: Two Man Advantage. The whole 12-tarck collection is now available digitally exclusively on Bandcamp (with one track streaming on Spotify) and 200 super-limited edition vinyl copies currently available from DCxPC Live.

Aaron "Coach" Pagdon: Our old friend, Scott Pasch, from the old DC-area band The Overprivileged, reached out to us with a strong desire to do a vinyl edition of an old live soundboard recording from CBGB's that 2MA [Two Man Advantage] had sold a limited CD self-release of back in the early 2000's. Scott had recently launched a label dedicated to releasing a series of live recordings done in tribute to the popular V.M.L. Live Series from the 1990's-2000's and thought that it was a good candidate. At the time he reached out, I was already trying to figure out what to do with another good quality soundboard recording we had from Punk Rock Bowling [& Music Festival] in 2018. I proposed that we do a Side A of one and a Side B of the other and that's how it all came together.

PERIOD 1: When and where did the live recordings featured on this release originally take place?

Coach: Side A was recorded live at CBGB's on Sunday, August 4, 2002, during an epic Hardcore matinee that had us playing on an amazing bill with Poison Idea, The Nihilistics, Kill Your Idols, S.F.A. and Thought Crime. Side B was recorded live at Fremont Country Club in Las Vegas at Punk Rock Bowling 2018 while playing an equally-epic show featuring The Subhumans, The Unseen, and NOI!SE on May 26, 2018.


PERIOD 2: Do you recall anything particularly memorable about either of these gigs?

Coach: The CBGB's Poison Idea show was pretty legendary for its time period... the place was absolutely packed, as Poison Idea's East Coast trips were so rare. Despite Tom "Pig Champion" [Roberts] winding up sitting in a chair by the end of the set, they were absolutely crushing. People still talk about that show today... Playing Punk Rock Bowling in 2018 was really special for 2MA. To be invited to play such an amazing festival of bands—so many of which we are all fans of and have grown up listening to and seeing—was one of the most memorable things the band has ever been a part of.

INTERMISSION: Would you mind explaining a bit about who exactly is featured across these live recordings?

Coach: Between the two sides, every member—past and present—of 2MA is featured on the record. Side A has the rhythm section of Amstel Fuhr (original drummer, Harry Rawlings) and Snapshot (current bass player, Jeff Marsala) and Side B has the rhythm section of Coach (current drummer, Aaron Pagdon) and Teemu Heineken (original bass player, Marc Lopez.)


PERIOD 3: What can you tell us about the circumstances behind the striking artwork seen across the vinyl release?

Coach: The concept of all DCxPC releases is specifically meant to stylistically emulate the old V.M.L. Live Series of Punk records done in the 90's, so the front cover and many aspects of the back cover are done in that fashion. A good friend of 2MA, the artist "Mattitude," did the designs. He had specific instructions for the covers, but was given full latitude for the interior artwork and he did a great job with the design on the reversible cover.

OVERTIME: Can you tell us a little bit about the limited edition vinyl release of 200 of DCxPC Live Presents: 2MA?

Coach: Like Poison Idea said best, "Record Collectors Are Pretentious A$$holes," so make sure to get your pre-order in because at only 200 pressed, they will go fast!

SHOOT-OUT: When can your endearing fans expect to see Two Man Advantage in a live setting again?