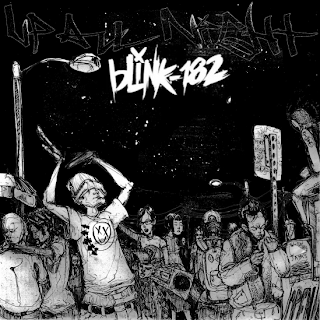 Let me simply start out by saying that Blink-182 have always been and will be one of my utmost favourite bands. Ever since first hearing Enema of the State (1999), Blink's albums and respective side bands have without a doubt soundtracked my summer days and nights. I've since delved back into the previous 2 albums [Cheshire Cat-Dude Ranch] gaining a solid sense of respect for 90's Pop Punk. Blink-182 went on to release two more albums: Take Off Your Pants & Jacket (2001) and "Blink-182" (2003) - along with a string of chart-topping hits before disbanding in 2005. "Another Girl, Another Planet" and "Not Now," 2 note-worthy non-album tracks were then included on Greatest Hits (2005) and release as successful radio singles.


After what seemed to be a pretty messy [intense] fall-out, Mark Hoppus, Travis Barker, and Tom DeLonge broke off into a few respective separate side bands... (+44), Angels & Airwaes, Transplants, and TRV$DJAM. Various fans took too the different releases in the appropriate manners, some favoring (+44) over AVA and vice versa. But nothing could fill the void left by the original band... Countless prayers to The Gods of Rock "N" Roll were answered when Blink-182 miraculously reunited on the 2009 Grammys, following a life-changing near-death experience for Barker.
The band has earnestly been hard @ work Neighborhoods, the imminent follow-up, since 09; A collection which will finally see the light of day upon its long-awaited release tomorrow (9/27/11). While I have yet to hear the majority of said collection, I'm sure it'll be worth the wait! I, for one, know that I'll be venturing out to the ACTUAL record store tomorrow to purchase a PHYSICAL CD copy... and you should, too; Fuck iTunes and their over-priced/compressed "sound quality" mp3 files!
Posted by Matt Horowitz at 2:19 PM