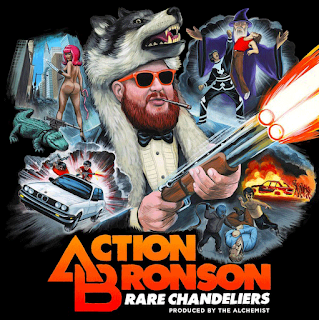 Action Bronson is kinda like the weirdly AWESOME love-child of Beastie Boys, Ghostface Killah, and Rick Ross. The Albanian-American rapper hails from Flushing, Queens and cut his teeth as a Top Chef before converting over to rhymin' roughly 2 years ago. In a true testament to his sheer prolific brilliance, Bronson has linked up with one sole producer @ a time for each project: Dr. Lecter/Tommy Mas, Well-Done/Statik Selektah, and Blue Chips/Party Supplies - Plus Mr. Wonderful, Saab Stories, "Blue Chips 2," and his VICE Records debut are ALL expected to materialize fairly soon, too. Action Bronson has already had a chance to work with everyone from Asher Roth to Wu-Tang Clan and was the undoubted MVP of Meyhem Lauren's hotel suite-recorded mixtape, Respect The Fly Shit. Bronson inked a deal with Warner Bros. back in mid-August and it seems like he has their full support to "spread his wings" a little bit on Rare Chandeliers, which was released just last Thursday, Nov. 15th. Filmed sometime over the summer, Back & Forth [below] is an impromptu interview between the 2 friends that really pre-sets the stage for their mixtape's simple, laid back vibe.


Maybe I'm just a little kid @ heart, but if that goddamn SWAGGED out album cover doesn't make you wanna automatically listen to Rare Chandeliers, then I don't know what will! Action Bronson wholeheartedly embodies every single crazy/outlandish thing on there: sheer elegance, brutality, drugs, money, bitches, uninhibited fun, wizardry, etc. But The Alchemist really is the album's true unsung hero, who came prepared with a secret stash full of Funky-ass beats. Señor Bronsolini, on the other hand, continues his long-standing tradition of naming tracks after weird [eccentric] people like Dennis "Mr. Belding" Haskins, Michael Vick, Sylvester Lundgren (Rocky IV), and Big Body Bess ... Sounds like Action Bronson ended up shackin' up @ The Alchemist's LA-based home studio, where they ultimately recorded some 40+ tracks for Rare Chandeliers with whoever happened to roll on through: Sean Price, ScHoolboy Q, Roc Marciano, Evidence, Meyhem Lauren, and Styles P. While Rare Chandeliers was eventually widdled down to 14 Boom-Bap heavy tracks, a few of them like "Randy The Musical," "Eggs On The Third Floor," and "Gateway to Wizardry" effortlessly riffle through 3-4 different beats during the short run-time(s). Surf the web and score a download of it now; I promise, you won't regret it!

Posted by Matt Horowitz at 1:11 PM