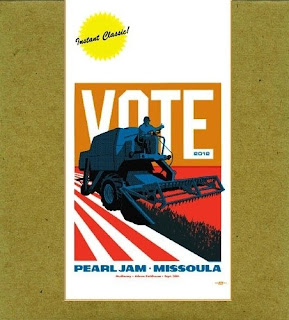 Eddie Vedder has always been a pretty rebellious, Punk Rock kinda dude, if you really think about it: sticking it to the laundry-mat by repeatedly wearing the same flannel, wedging out a genre of his own in this crazy, Post-Hair Metal world, fighting for what he believes in, making a ukelele-based album, and searching for long-lost love/freedoms! I can remember listening to Pearl Jam back when I was like 10-15 on Philly's own Y-100 [100.3 FM], when shit like that was still being labelled "Alternative Rock" ha. The band initially formed on the out-skirts of Seattle between 1984-90 and have been compiling everything form greatest hits to #RARE live takes ever since; Lost Dogs ("Leavin' Here") and Madison Square Garden, July 9th 2003 are 2 STELLAR releases that stick out in my mind... pulled from 100-200 official bootlegs the band's managed to re-release since 2000.


It was announced on Election Day, in the wake of Sen. Jon Tester's winning efforts, that Pearl Jam's recent Sept. 30th rally show from Missoula, MT would soon be released online. Earlier this afternoon, it was further detailed that the release would help launch Pearl Jam's high-quality "Instant Classics" bootleg series. "Shortly after finishing the show, the band declared it an "Instant Classic" and asked that it be made available quickly to the fans and for a limited time at a special price ... Every so often, performances like this stand out immediately as "one for the books" in the band's eyes. When they do, these "Instant Classics" will continue to be made available with this special offer." (Pearl Jam) Missoula Bootleg #1 is currently up for download @ the band's site for $4.99 between Nov. 6-13th and will be re-upped for $9.99 after that, with all proceeds going to a local homeless center. It looks like the album's chock-full of roughly 30 tracks - This including well-known hits like "Better Man," "State of Love & Trust," "Corduroy," "Small Town," a bunch of fan favourites, and worthy Creedence/"Last Kiss"/The Clash covers.
Posted by Matt Horowitz at 9:27 PM