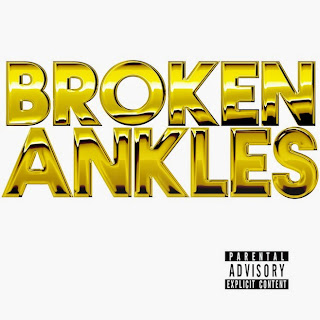 While I've been an avid supporter of Girl Talk aka civilian engineer Gregg Gillis' hyper-disoriented (s)mash-up style since the initial media on-slaught of Night Ripper (2006), I never thought I'd see the day when he'd commit a full-fledged collaboration with a real-life rapper to wax, let alone former Roc-A-Fella affiliate and Philly native, Freeway; to the best of my knowledge, Gillis hasn't worked alongside an emcee since his 2011 Pitchfork Selector-initiated Jim Jones track, "Believe In Magic." It seems as though Broken Ankles is just a small chunk of a recorded, albeit unreleased, body of work, the first of which will become available for FREE download this upcoming April 8th. "Tolerated"'s Allen Cordell-directed video treatment is loosely inspired by late 90's Brit-hit "Bittersweet Symphony." "I just thought it'd be cool to do a video where the premise is me and Freeway walking down the street and people coming at us more or less," Gregg Gillis recently told the good people over at online publication XXL. "The song is kind of am anti-hater sort of song. I thought it'd be cool to have a bunch of people bumping into us and give us a hard time," he continued. It starts out as just harmless cold shoulders and stink faces, but quickly morphs into plenty of hand-to-hand combat and gruesome bloodshed. Cordell's cinematic genius shines through as Freeway literally throws a severed arm into an open doorway, which is miraculously caught by Waka Flocka, who automatically starts rapping his ferocious verse; "Ain't no tellin' how far I'ma go / You know I got a karate choppa wit me, watch out you a pro / if you get too close, disrespect me do the most / knock you out, beat you wit a lead pipe til you convulse..." Girl Talk, on the other hand, showcases his own milli-second-splitting beat-shifting skills right around 2:10 as "Tolerated"'s stuttering beat shifts into a Run-D.M.C. inspired slightly more Boom-Bap-leaning drum pattern, which eventually eases back into the stock beat after about a minute. Girl Talk & Freeway's premier 6-track EP, Broken Ankles will be available for DatPiff download this upcoming Tuesday, April 8th.

Posted by Matt Horowitz at 9:02 PM