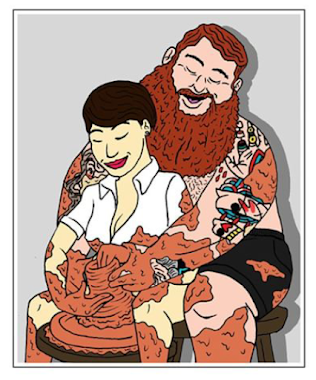 Although he's been effectively dominating the mixtape scene with fully fleshed out "street albums" like Blue Chips 1-2, Dr. Lecter, Well Done, Rare Chandeliers, and Bon Appetit... Bitch since about 2008, Action Bronson has finally gotten around to liberating his long-rumored major label "debut," MR. WONDERFUL, which came out nation-wide Monday. Ahead of his 13-track album, VICE Records let loose a zany, Tom Gould-directed Spın̈al Tap-esque mock-umentary, which portrayed Bronson something to the effect of "The Great Leader," Kim Jong-Un; coinciding with yesterday's multi-formatted MR. WONDERFUL roll-out, Action Bronson partnered with the good people at the YouTube Music Awards to present the video for his Chance The Rapper-assisted Mark Ronson-produced track, "Baby Blue." It's just one of two Dap-Kings-indebted Ronson-produced tracks included within the album, the second of which showcases a Jazz-Rock sample lifted from Billy Joel's "Zanzibar" (1978) that was only cleared after Bronson & Ronson penned a gracious hand-written addressed letter to Mr. Joel himself.


"This is the triumphant ending to ["Thug Love Story 2017 The Musical"]. This is me saying, 'F*ck you, you can't f*ck with me. I'm moving on to bigger and better things. You broke my heart, this and that, it's time to move on. I'ma show you through this beautiful music and horn presentation,'" Action Bronson lamented to Complex during a recent all-inclusive track-by-track liner notes piece. Bronson and director "Lil Chris" Robinson teamed up to create a wonderfully on-point, albeit painfully short re-creation of Eddie Murphy's timeless 1988 blockbuster, Coming to America; "You can find Bronson as virtually the full gamut of characters from the sh*t-talking barbers to your friendly (but well-equipped) fast-food worker to the leader of White Chocolate and beyond," as okayplayer fittingly describes it. While he doesn't appear to play any form of Coming to America-related character, Chance The Rapper is honestly, one of the most enjoyable parts of "Baby Blue" — frantically rapping: "I hope you get a paper cut on your tongue from a razor in a paper cup... I hope you never get off Fridays and you work at a Friday's that's always busy on Fridays." And if that still isn't enough Bronson for you, he's teamed up with super-fan, world-renown chef, and TV personality Mario Batali for part one of a brand new F*ck, That's Delicious-presented mini-series in which he'll "collaborate with the best chefs in the world to create food fit for MR. WONDERFUL."