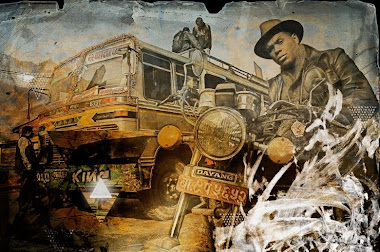 "Oh well, since it leaked... here's a better quality version," @JayElectronica exuberantly Tweeted early Friday morning, upon the unexpected leak of a low-quality version of his track, "Road to Perdition" 'guest starring' mentor and Roc-Nation label boss, Jay Z. It's the latest track Electronica's recorded and released 'with' Jay Z (behind "We Made It" and "Shiny Suit Theory") - 'with' in quotation marks because Jay Z's feature in question on "Road to Perdition" is more or less composed of lines sampled from his American Gangster-centric track, "Success" (2007). "Road to Perdition" in fact, first appeared on Jay Electronica's 2012 screen-grabbed 15-track Act II: Patents of Nobility (the turn) rough tracklist. Electronica's notoriously shelved album will reportedly also showcase the varied talents of Kanye, Serge Gainsbourg, Erykah Badu, Jay Z, Charlotte Gainsbourg, Puff Daddy, The-Dream, and wait for it... former President Ronald Regan!?


Despite the inherently cryptic nature of Jay Electronica's rather sparse and infrequently updated 'discography', which by my count, tallies in at right around 40 official/unofficial tracks; even attempting to compare Electronica's verbally dense word-play to that of his peers, would be something along the lines of trying to compare a dictionary to a "Learn My ABC's" book. Not entirely unlike last year's sudden "Better Tune In with The Infinite" leak, "Road to Perdition" appears to jive with Electronica's previously leaked Act II tracklist, which ?uestlove says has apparently been finished and turned in for a few years now; "[Jay Z] listens to it constantly, says it's his favorite record of 2012, [but] it has no single on it... Jay wants a single." Here's a few of my favorite bars lifted from Jay Electronica's latest sharp-tongued release, to get you hook-line-and-sinker, if you aren't already interested, for whatever reasons: "I got that black-on-black skin tone, actual-fact syndrome / That's why I dropped the jewel on every verse you heard me shit on [...] My swag is on 1.21 gigawatts, 10 trillion kilowatts / Hardcore Thriller pop, Michael Jackson, ni**a rock / Google me, baby, understand where I'm coming from / My destiny's to hit a grand slam when my number come."
Posted by Matt Horowitz at 10:24 PM