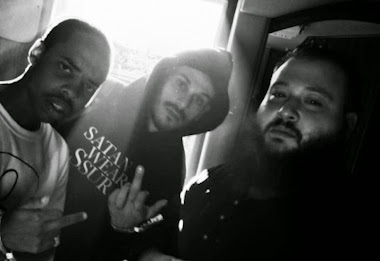 Needless to say, it's been one Hell of a week for Underground Hip-Hop; Action Bronson, Earl Sweatshirt, and Kendrick Lamar all dropped staggering, critically-acclaimed new albums this past Monday, March 23rd (I'm unsure why they strayed away from the typical Tuesday release day). I went out and bought hard CD copies of Bronson and Lamar's albums, but I wasn't able to find I Don't Like Sh*t, I Don't Go Outside at out local Best Buy, and I've really only had a chance to delve into Action Bronson's gloriously frantic "debut," MR. WONDERFUL. While Bronson and Lamar's TDE crew seem to have a mutual admiration for each other, the two fledgling rappers have never recorded any material together, at least not to my knowledge. But Bronson has in fact recorded a few non-album tracks with Odd Future and their reigning adolescent prince, Earl Sweatshirt; most notably, Domo Genesis' pro wrestling-referencing Alchemist-produced mixtape track, "Elimination Chamber" (2012). However, in honor of their tandem just-released full-lengths, The Alchemist decided to sporadically liberate a previously unreleased Action Bronson & Earl Sweatshirt collaboration of unknown origins, "WARLORD LEATHER."


Alan The Chemist's attached Soundcloud "single" artwork features a screen-grabbed frame from Swedish Indie Rockers Peter Bjorn & John's triumphant mega-mohawked Asian biker gang-filled "Nothing to Worry About" video, which oddly enough, Bronson previously rapped on for a Party Supplies-produced remix - ha! "The glorious bastard is back / in that hoodie like a vein that collapsed cause it's black," Earl Sweatshirt ferociously raps on "WARLORD LEATHER"'s introductory verse. "I'm like Swayze mixed with Sajak, in a straight jacket... play the guitar with my teeth (yeyeyeye-ya)," Action Bronson swiftly rhymes in his verse, as he effortlessly compares himself to Patrick Swayze, Pat Sajak, and Jimi Hendrix and that's just the tip of the metaphorical iceberg. It's a damn shame "WARLORD LEATHER" wasn't included on either MR. WONDERFUL or I Don't Like Sh*t, I Don't Go Outside, but I guess we can just consider it an appended bonus track of sorts. Although, it seems as though The Alchemist has a whole digital vault full of Bronson/Sweatshirt tracks, including one wherein Scott "Mad Skillz" Caan of Entourage and Hawaii Five-0 fame supposedly "killed" [read: head-scratchingly out-raps] Bronson. So, stay tuned for further scientific experiments in lyrical wordplay from Alchemist's vault, my fellow Hip-Hop heads!

Posted by Matt Horowitz at 9:14 PM