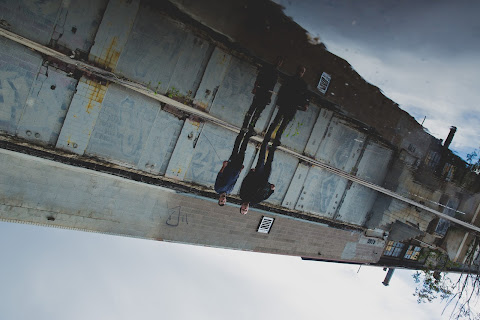 "'Rap Trope Questionnaire" is kind of a round-about way of talking about being manic depressive, but from the perspective of someone inhabiting an arena where that sort of behavior is welcomed and even encouraged. It is like an asset in some ways to be able to turn the personality up to 150%, even if it is "blindness to kick bliss in the shin and put my emotional win on display again" (yuck, quoting [myself] feels gross!)" CURTA emcee Jake recently wrote within an emailed statement. CURTA was formed in Colorado a number of years ago because, as Jake puts it, he simply "wanted to make music that was not beholden to prior ideas of what a "band" should be;" often labeling themselves as a Glitch-Hop or Art-Rap group, CURTA and in-house producer 4Digit readily cite Pavement, Coil, Saul Williams, and Pere Ubu as immediate sources of influence and inspiration. Zilla Rocca, a close friend and frequent collaborator here at The Witzard, emailed me and asked me if I would be interested in premiering a remix he recently concocted for some buddies, which ended up being CURTA & 4Digit. "I was supposed to do a show in Philly with CURTA as Career Crooks with Small [Professor], but things came up and we couldn't do it. So, as a consolation, I asked them if I could remix one of their songs. They passed along "Rap Trope Questionnaire" and I just listened to the a capella for a while. Usually, I hear a song I like and know how to approach the remix—it's typically a contrast to the original in some way. With the CURTA joint, I didn't want to hear the song; just wanted the BPM, so I could just have an original idea for the composition, rather than reacting to a song," Zilla Rocca revealed within his own emailed statement.


I'm very proud to present, without further ado: the world premier of Philly Noir-Hop rapper-producer Zilla Rocca's "Rap Trope Questionnaire" remix right here at The Witzard. "Rap Trope Questionnaire" originally appeared within CURTA's last full-length release, 2015-release Replica and was "re-contextualized" from a sparse, yet aggressive Nine Inch Nails-leaning Boom-Bap affair into an even more stripped down drum and piano-led composition reminiscent of Def Jam/American Recordings founder Rick Rubin's unique brand of reduced Hip-Hop. "The reason this remix is cool, is I feel that it brings out a vulnerability in the vocals that I didn't really notice in the original version. This is a song about some rather direction-less, arguably unimportant identity questions... So, I like that that kind of sing-songy, almost sad aspect has been given light with the remix and the piano he used. Because these questions do hold some weight for me as CURTA. Also, in sticking with the manic aspect of the lyrics, I dig the way he flips it into a whole different beat about halfway through. Good sh*t, Zilla!" CURTA commented on Zilla Rocca's remix. CURTA has announced an entirely 4Digit-produced EP fittingly titled CLICK BAIT, which will be released on FilthyBroke Recordings and French-based Hello LA on April 1st and is currently available for pre-order. It will showcase six unique Glitch-Hop tracks and features two lone features from Serengetti alter ego Kenny Dennis and Offal King with mastering handled by MANMADEMADMAN; while Zilla Rocca and partner-in-crime Small Professor, on the other hand, announced they've inked a deal with Canadian Hip-Hop imprint URBNET to release their long-rumored joint album as Career Crooks, Good Luck with That.

Posted by Matt Horowitz at 6:42 AM