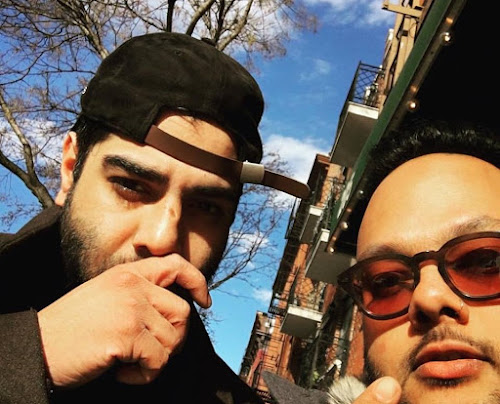 "When I was asked to contribute to Rough Trade Publishing's A Song A Day to Keep The Pain Away (#SADRTP) benefit project, covering Grizzly Bear's outstanding album cut, "Foreground" somehow felt like the right starting point; in the moment, I was reacting to the Trump Administration's Muslim Ban, projecting a song about a relationship falling apart onto man and country," one-time Das Racist affiliate and frequent Heems collaborator Lushlife wrote within a recent statement. "Foreground" was released on Day #74 of a planned 90-day initiative by Rough Trade Publishing, which they vehemently attest aims to "help a little with the pain and perhaps, even inspire you. We hope so. We all need to be doing whatever we can to make 2017 a better tomorrow." Previous prescribers to their A Song A Day Keeps The Pain Away benefit comp. include Sondre Lerche, Nada Surf, King Khan, A Place to Bury Strangers, Superchunk, awesomely-named Prism Tats, Juliana Hatfield, and countless talented artists. "Foreground" originally appeared within Grizzly Bears critically-acclaimed 2009 Warp Records album, Veckatimest; although, they've been relatively quiet since its 2012 follow-up Shields, it appears as though frontman Ed Droste and Grizzly Bear bandmates Daniel Rossen, Christopher Bear, and Chris Taylor are currently hard at work writing and recording their long-awaited fifth studio album for imminent release.


Lushlife is certainly no stranger to recording and releasing inventive genre-spanning covers, as he has currently re-worked or expertly interpolated the likes of My Bloody Valentine, Billy Idol+French-Italian Horror film, French Coldwave pioneers Asylum Party, R. Stevie Moore with fellow Philadelphian Zilla Rocca, and Kanye & The Beach Boys for a fittingly-titled 2005 mash-up album, West Sounds. "As the administration's anti-immigrant policies predictably set ablaze a rash of hate crimes against Indian-Americans and other minorities (a topic I recently wrote an op-ed about in the Washington Post), the track's book-ending rhymes about xenophobia and nationalism took on a heightened urgency. Ultimately though, my goal was to re-interpret Grizzly Bear's plaintive joint with buoyant marching drums and fizzy Pop synths to emote something hopeful for these bleak times," Rough Trade Publishing's recent press release continued. Lushlife's like-minded MY IDOLS ARE DEAD + MY ENEMIES ARE IN POWER mixtape was unleashed upon the terribly dumbfounded world on the eve of Donald Trump's presidency with 100% of proceeds earned being donated to the ACLU. I was lucky enough to personally speak with Raj Haldar (Lushlife) and publish a comprehensive 5-question Idols + Enemies-centric interview right here at The Witzard!
Posted by Matt Horowitz at 12:54 PM