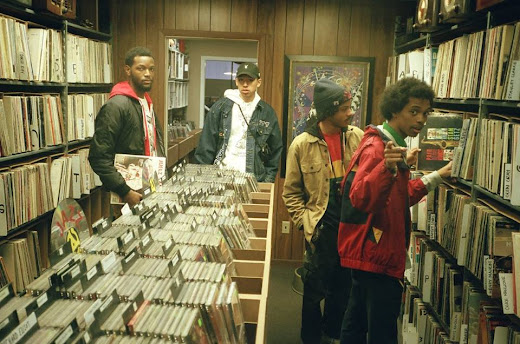 "GENRES UNKNOWN SINCE 1998 - Our goal remains the same, as it was when we started the label: to share bleeding edge music with as wide an audience as possible. Hearing new approaches to arranging sound should be a fun adventure. The sound of Deathbomb Arc is constantly changing, as explorers reach new frontiers. We invite you along on this exciting journey.

Deathbomb Arc has had the honor to work with so many great musicians and groups; putting out some of the first music by acts such as clipping., Foot Village, Black Pus, Death Grips, Julia Holter, Signor Benedick The Moore, tik///tik, [Lana del Rabies], I.E., and Captain Ahab. We encourage you to spend some time exploring our discography and large archive of free streaming music to learn more..."

"It's our favorite holiday of all... NEW RELEASE DAY!! We've been really excited to share this one with you. The long-overdue new album from THEY HATE CHANGE. 2 years ago we released this Florida-based Hip-Hop duo's album, Cycles. Now, we are thrilled to present their latest Now, and Never Again. It is available on cassette and at all major digital platforms. Plus, they got a new "FAILED" music video. Find out what that means by watching!!

I. I noticed your Bandcamp page notes: "All proceeds go to The Transgender Law Center (TLC) from now until forever;" mind if I ask why They Hate Change is so passionate about this organization, in particular?

André: We wanted to make sure we supported TLC and joined Bandcamp, as they gave their portion of sales for the day to the organization. As for continuing our support, it was a decision made on Vonne's part and I support them.

Vonne: For me, being an agender person and understanding some of the struggles that trans people go through in this country, it just makes sense to contribute something to an organization that's trying to end those struggles however they can.

II. How did They Hate Change get involved with Hal Williams AKA Pyramid Vritra for your 2013-14 EP's Control & Today.? Do you have any immediate plans to collaborate again?

Vonne: Hal is, like, the reason we do what we do. When we heard his group, Jet Age of Tomorrow, we became, like, instant stans. I emailed him early They Hate Change stuff and he dug it and we asked if he'd remix our song "Brittany" from Today. and he did! We’ve just been working on stuff here and there ever since. It's always pretty random. We have a song we worked on in LA last year that we're holding, so that'll probably come out soon enough.


III. I see that "Horn & Flute," as well as "additional vocals" on "Sandy Kissed Gary Wilson Last Night" were provided by Stones Throw's own Gary Wilson; now, how exactly did Gary get involved in Today.?

Vonne: Gary is the easiest, coolest person to reach. We just DM'ed him on Twitter and asked and he was down... before we had anything out! Sent him the track and he Sent it back in like, a day and was like, "I added some additional stuff. You can take it out, if you want." Of course, we didn't!

André: All I can remember is losing my damn mind at 2:00am on a school night.

IV. How would you personally say They Hate Change's overall sound, style, delivery, etc. has changed and progressed since your last album, 2015's Cycles?

Vonne: 2015, I would say we still sounded like our influences; maybe, a combination of all of them. Cycles is really indebted to Sa-Ra and stuff like that. But Now [and Never Again] really doesn't sound like anybody else, to me, at least. I think, we really found our own swag and delivered it in our own way this time. The message and the feeling was right in Cycles, but, I think, we really pinned everything down on here. Styles, beats, everything. It just feels new.


V. What's the story behind your recent Kenny Bobby-directed "OFFICIAL FAILED MUSIC VIDEO" for "Chase" from Now, and Never Again?

André: Watching and listening to a ton of UK Grime; sorta fell into a wormhole watching Tim & Barry videos and wanted to pay homage. Bad audio, weather, and random people jumping into clips were just some of the issues we had. We agreed to just chop up the footage and keep it as raw as possible. We've had plenty of trials and errors performing live, so this was no different.

VI. What might both of you cite as your greatest sources of inspiration and influence, while you were creating Now, and Never Again?

Vonne: Jam Pony DJ's, Harmonia, and DJ Rashad. There's a couple out-takes from the album that were really No Wave-inspired, like Teenage Jesus and stuff like that. You might hear more of that soon.


VII. What exactly were your typical writing, recording, creating, production, etc. processes like during the making-of Now, and Never Again?

Vonne: We pretty much, always start with making a beat. No concept or anything, just making something. I don't remember how or why we decided which beats would get verses... it had to just be the vibe. Like, when "Opposite Side" hits, it just feels like somebody should kill it.

André: I believe, once we had [written] to "Chase," it was like, "MAYBE, we got something." After that, Vonne and I would both look at each other and grin, make a few more tweaks, and we just kept going.

VIII. Now that Deathbomb Arc has unleashed Now, and Never Again into the terribly unsuspecting world, what else do They Hate Change have planned next?

Vonne: More tapes!!! More shows. Just more music. All of our records are wild short, so, I think, something a little longer is appropriate now.


IX. For listeners who may be new to the Deathbomb Arc (DBA) catalog, what specific releases from your fellow label-mates might you suggest they listen to first?

André: The No Children compilation (2015) would be a cool place to start, I think; gives you a small glimpse into the Deathbomb Arc world. And No Smoking (2016) by Ed Balloon, which is also, a favorite of mine.

Vonne: Turbine - Thanks Karen (2000) that's the first DBA release from all those years ago and still, nothing Mainstream really sounds like it. It shows how forward-thinking Brian [Miller] is. In The End I Am a Beast from Lana del Rabies (2016) that's probably, my favorite. It's just so damn physical. It's "3-D" music.

X. What might you be able to tell The Witzard's readership about your 2017 documentary, Californian Portrait of THEY HATE CHANGE? I believe, I read it includes footage of you working with Jonathan Snipes of clipping.; are there any immediate plans for the recordings from those sessions to be widely released?

Vonne: Our friend, Bryam Castellanos, had the idea to film our trip out to LA for a show at The Smell, so that's how that came together. That Jonathan track is sick! [I don't know] if we'll put that out any time soon, but we talked to William (Hutson) recently about all of us doing something new, so that's coming for sure.