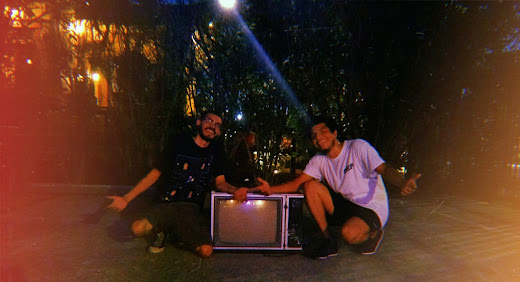 Virgil Wolfe is an Alternative Hip-Hop artist based out of Baytown, Texas who's affiliated with cunabear's BearTooth Collective tape imprint. Wolfe has been rapping and self-releasing his own material at rather rapid pace since 2015. He's previously worked alongside the likes of Alcoda, Calamity, Pacman AKA "Da Round Hero," and Symmatree of Grid Squid. For his most recent release, Virgil Wolfe joined forces with Houston-based beat-maker Strcolctr for their Unlimited TV Dinners EP. "From the doctor love story to the childhood-filled with novellas, Unlimited TV Dinners is short, sweet, and packed with flavorful melodies for the whole family to enjoy," Virgil Wolfe's Bandcamp page enthusiastically proclaims. Clocking in at just under 12 minutes—or the length of one commercial break!—Virgil Wolfe & Strcolctr manage to cover everything from doctor love storylines to the fabled "Filler Episode;" to Star Trek's "Red Shirt Dilemma" to the lack of "darker Latin people in most Spanish soap operas," as Virgil described it, via email. Virgil Wolfe x Strcolctr's Unlimited TV Dinners is now available digitally directly from Virgil Wolfe with an extremely limited run of hand-made cassette tapes on Couchloaf Records.


"We met up one time after exchanging messages about getting booked on a Couchloaf [Records] show, I performed, and we developed a nice friendship. This was right before I went on my first tour with the homie, Calamity, who had worked with me fully on the project where he made all the beats, Before The World Wakes Up (2017.) When we got back, Calamity and I had decided to work on an EP together, but we live in different states, so I started looking for someone, who would be able to help scratch that itch. I HAD to create something! I messaged Strcolctr on his personal Facebook profile, asking him if we could work on something. It turned out to be a nice collaboration, instead of a "let me buy your beats" situation.

After idea-tossing and developing, we though about the television, how it influenced us as children, teenagers and adults... We met up once a week (I live about 30 minutes or so away from him) for progress reports; he'd have a new beat, I'd have a new idea or writing. We would also, message each other and I'd send him Voice Memos of the work I had done during the mornings. I work on music early in the morning to catch enough time. I'll wake up at 5:00am, shower, drink coffee, and get to writing until about 7:30 or so, before heading into work. That's how I worked on Unlimited TV Dinners."

Posted by Matt Horowitz at 8:53 AM