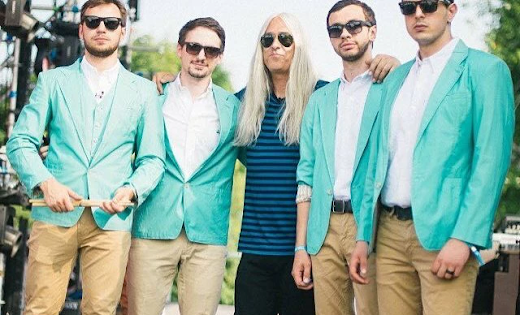 "Shawn Lee is one of the most proliﬁc musicians of his generation. A multi-instrumentalist, producer, singer/song-writer, and composer who has released [42] albums as an artist to date. He has played, produced, and written on hundreds of records. He has worked with a diverse range of artists, including Jeff Buckley, Kelis, Money Mark (Beastie Boys,) Amy Winehouse, Darondo, Adrian Younge & Venice Dawn, and Princess Superstar. Lee's music has been used extensively in both ﬁlm and TV: Monuments Men, 20 Feet from Stardom, Oceans Thirteen, Eastbound & Down, Ugly Betty, Nip/Tuck, Confessions of a Shopaholic, Cinemax, Jaguar, BMW, Clarks Shoes, Head & Shoulders, and many many more. He has also, created bespoke music for Hermann Miller, Ace Hotels, and Wallpaper Magazine.

As a composer, he has scored two documentary ﬁlms: Elevate and Under The Sun. Lee also created the original soundtrack for the feature ﬁlm Save Angel Hope and composed the original score for the Rockstar video game Bully, which was nominated for Best Score twice - winning once. Shawn Lee is an American and has lived in London, England for the past 20 years with his wife and his two daughters," reads Shawn Lee's press one-sheet. For his most recent release, Shawn Lee has teamed up with Soul-Funk quartet The Soul Surfers "from cold heavy Russia" for a collaborative 9-track affair on Fat Beats/Silver Fox Records. The Witzard recently conducted a comprehensive emailed interview with Shawn Lee covering everything from The Soul Surfers to his work with Clutchy Hopkins. It has been lightly edited for general clarity.

I. How did you initially link up with The Soul Surfers for "Time Is a Gun" from their 2015 Ubiquity Records album, Soul Rock!?

I was asked by either Enrique [Estrella] or Andrew Jervis from Ubiquity [Records] to collaborate on one song with The Soul Surfers. They knew I dug their music, so the answer was a resounding "YES!" They sent me a basic backing track and I played vibes, percussion, guitar solo, etc. on it and then, wrote the song and sang it. I put a final mix on it and finito: "Time Is a Gun" !!!

II. How did you and your newly-formed label imprint, Silver Fox Records, end up teaming up with Fat Beats to release Shawn Lee & The Soul Surfers?

I mixed a Brownout EP [Over The Covers], which was released through Fat Beats. Adrian Quesada introduced me to Joe Dent, who works there, and it felt a logical way of releasing some new music in the future. So far, I have released my [Ping Pong Orchestra] Techstar album, Young Gun Silver Fox, and the album with The Soul Surfers to date. So far, so good!


III. How exactly was Shawn Lee & The Soul Surfers' self-titled album recorded, with you being based out of LA/London and The Soul Surfers hailing from Nizhniy Novgorod, Russia?

With the exception of the basic track for "Milky Way"—which was recorded in Moscow—the rest of the album was made by sending files back-and-forth online. The Internet can be pretty darn handy sometimes! Certainly makes the world smaller and makes these kind of International collaborations possible.

IV. Upon your recent trip to Moscow, Russia to play a festival with The Soul Surfers, you mentioned a documentary film entitled "Let It Soul" was filmed; sponsored by Levi's and filmed in London & Los Angeles, as well. What exactly does the film contain and when might it see a proper wide release?

The film is a 45 min. documentary called "Let It Soul" directed by Kirill [Kulagin]. It had it's premier on June 1st at a film festival in Moscow screened in Gorky Park. It documents our meeting in Moscow and shows the process of us writing and recording the song "Milky Way" taken from the album. It also, shows me in London and has Adrian Younge & Malcom Catto in it, as well. The film will be out in the winter. And as you said, it was sponsored by Levi's.


V. Now, I know you played a show together in Moscow for "Let It Soul," but do you have any immediate plans do play any more live shows with The Soul Surfers? How about a proper tour together?

As you said, I've already played a few shows with The Soul Surfers. There are plans in-the-works to do a show in LA. Hopefully, that works out and we can play some more shows. We'll see...

VI. You mentioned you've previously had the opportunity to work alongside the likes of Kelis, The Jungle Brothers, Brownout, Adrian Younge, Darondo, Clutchy Hopkins, Georgia Anne Muldrow, The Black Pumas, Amy Winehouse, and more—happen to have any particular unique stories or memorable moments you might be able to share?

You know, doing the first Clutchy record was really funny! So many great stories that I can't tell you about! Hahaha


VII. How did you initially come in contact with the (desert) man, the myth, the legend himself: Clutchy Hopkins? Have you been in touch with Clutchy in the years since yo 2008-09 collaborative releases, Clutch of The Tiger & Fascinating Fingers?

I discovered Clutchy, first, through an online album review and then, started watching all the [Clutchy Hopkins] films and became totally obsessed. It wasn't long before we began chatting on MySpace and then, next thing I knew, I was in The Mojave Desert making dusty jams with the cave-dwelling genius!

VIII. How did your collaboration with Adrian Quesada (Brownout) The Electric Peanut Butter Co. first come to fruition? Can we expect to hear Trans-Atlantic Psych Classics Vol. 3 (or Vol. 0) any time soon?

Adrian is such a cool and talented cat. I think, we operate in a very similar fashion; loads of different projects and keeping busy with both studio and live gigs. We both have two daughters around the same age, too. So, a lot in common. I think, we will do another Peanut Butter album. I think, next year sounds like a plan! Just got to find a window that suits us both.


IX. Now, I know your long-standing band is called The Ping Pong Orchestra, but what exactly is "Ping Pong Soho Radio?"

My Ping Pong Radio Show on Soho Radio is my way of me sharing my record collection and my tastes in music, both past and present. It connects the dots. I love doing it—I'm coming up to my 100th show soon! You can check it out on Soho Radio's mixcloud [page], at your leisure.

The Tabla album was absolute madness; such a crazy, geeked out project! I played everything on the album, except for Dominic Glover on trumpet and Andy Ross on sax and flute. And last but not least, Prithpal Rajput on tabla putting "tabla" into The Tabla Band!


XI. Your recent release, AM Waves your second release in just as many years as "Young Gun Silver Fox." How does AM Waves differ stylistically from it's 2016 predecessor, West End Coast?

AM Waves is a logical progression from West End Coast. I wanted to have more horns on it, but other than that, it was just a case of writing more material. I do think we had honed in on what we are doing and the second album is even better than the first. I love it and I'm really proud of it.

XII. With a whopping 42 albums released since signing with Giles Peterson back in 1993 where would you personally suggest new listeners ideally, start when delving into your plentiful back catalog?

Now, that is a good question! If you like songs, I'd suggest Young Gun Silver Fox, AM & Shawn Lee, or my Soul Visa album. For instrumentals, I'd say, any Ping Pong Orchestra albums like: World of Funk, Voices & Choices, or Bei Bei & Shawn Lee.

Posted by Matt Horowitz at 8:37 AM